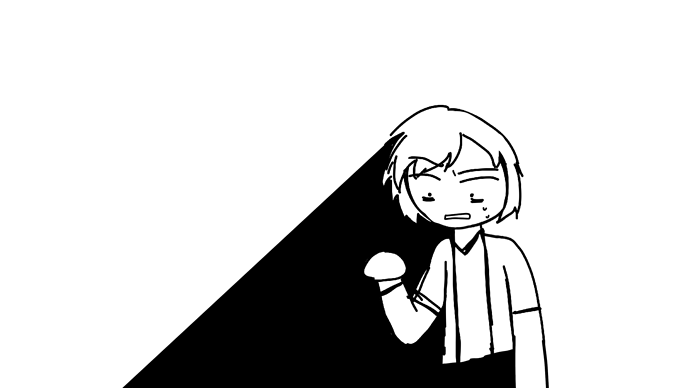 We meet, once again.
For the rest of Carson’s quest, I wish you the best.

“Say, if you found the Crescent Squad member, what would you do with them?”

Once Carson heard Markus’ question, he remained silent—to process the question itself, to wonder why would Markus ask that, and to not act out right away. As his silence stalled the time, he wondered: Should he continue to trust Markus, if he was actually a part of the Crescent Squad—the group of people who took his family away?

As Carson sat there, his suspicions grew further by Markus’ expressions—both from body and face. Markus could’ve been incredibly nervous, but that didn’t make him any less suspicious.

“Just—just answer the question, alright? What would you do with them?” Markus asked as panic shook his voice. “You don’t plan to kill them, right?”

Carson didn’t answer in any shape or form, and his mouth remained shut. He only waited for Markus to speak again—with all the reasons to not trust him.

It didn’t matter if Carson wanted to believe Markus was innocent, he couldn’t let denial take over this possibility. The benefit of the doubt? Carson didn’t want to think about those words at this moment—as he could only hear Markus and the blowing gust from outside.

“Uh, hey. This roof’s not broken, right?” Markus looked at the ceiling and poked his head outside. “It’s gonna rain.”

Carson didn’t care about ending up drenched, he only wanted to prove his doubts right. He wanted to believe that he couldn’t trust anyone, not even someone who made his past few years a bit more tolerable.

“You’re not speaking, huh?” Markus turned back to Carson, making eye contact. He took a few deep breaths before continuing. “Fine, I give up. I was with that Crescent Squad.”

Whether or not Markus was lying, Carson already knew he shouldn’t have trusted him. Once he realized that, he checked for the dagger in his pocket and got up.

As Carson took a step towards him, Markus scooted away. “H-hey, you’re not killing me, right?”

With a few steps from Carson, Markus stood up and cast a magic circle in front of him. “Look. If you wanted me dead, I’ll burn this building down.”

Carson stopped moving, clenching his fist as he charged his magic. “Then what?”

Markus’ magic circle spun—holding back his magic energy. “Look. I just wanted both of us to live, alright? If you’re taking me down, then—”

Carson’s fist flew through Markus’ flaming circle and straight into his face. Once the magic circle was withdrawn, he grabbed Markus’ shirt collar. He knew Ace wanted the Crescent Squad member back, but it couldn’t hurt to give them a piece of his mind, right? For all those years he couldn’t return home, for his entire family that disappeared—Carson struck Markus again.

After the blow, Carson expected Markus to fight back. But when he loosened his fingers from the collar, Markus’ body dropped onto the ground. Once he heard a rumble of thunder outside, the realization of knocking Markus out hit him.

“Markus,” Carson called, as he shook Markus’ body. He couldn’t have killed Markus with two punches along with his magic, right? Sure, he wanted to give the Crescent Squad a piece of his mind, but to kill Markus?

As Carson’s heartbeat raced, he couldn’t sense any pulse from Markus. He should’ve been calm first before checking on him, but with the sight of Markus’ limp body, he doubted he’d be thinking right soon. Once Carson sensed for his magic instead, it was warm—from his Fire Magic along with his life energy.

As he caught Markus’ magic energy, he sensed something else, too. Once he concentrated on the other presences from afar, he recognized their aura—two familiar presences of Gold and Magma Magic.

It’s John and Virgil, and they’re heading towards this place. Sure, there’s time for Carson to flee from this spot, but there’s also Markus—who’s still unconscious.

What should Carson attempt next?