Avian Legends is a fantasy game where every player is a half human half bird. They are half as large as normal people (in roblox that’s 5 studs for normal, and players are 2.5 studs). The players are also in an earth that has ~half as much gravity as normal.

This game was made to be emphasize on nearly full on aerial combat as everyone would be flying. I haven’t seen ANY fantasy game that mainly has a flying combat system. 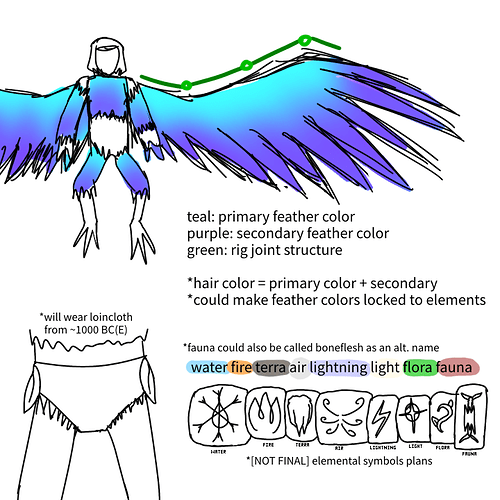 Their world technology would be set in around (still deciding) 2000 BC(E) to 1000 BC(E). There are 8 main regions in the world as Avians (what we call the half human half bird players) are separated by element, and a “regionless” hostile wild land.

There isn’t much lore in this game because of how far back in time the world is set in and I wanted players to make or write the lore. Making or writing the lore meaning that guild events (such as mass RKing) would become lore, or if players are (for example) the first to achieve something, they become a lore character. Lore could also come from developer events or updates. A big problem is that I don’t want lore to be “written” from glitches (players having impossible builds/setups).

You know how in most fantasy lore, there is some story before our present day that we play in? There is none or little in Avian Legends.

Let’s take the example from the Arcane lore about the first person who awakened 3 minds. If there was a “first person to use 2+ elements” in Avian Legends, then I would want that person to be a player who found a secret method.

Another example, 2b2t. There is a lot of history in that server, and players are a large cause. I want player guilds or clans to be so significant somewhat like how 2b2t groups are.

tldr: I want lore to be written or made by player activity.

Each player will be able to wield 1 power from this list:

I’m going to add a way to obtain a 2nd power so that there will be story about the first person to use 2+ elements.

There will be a boons and flaws and talents system just like Deepwoken, but this will be somewhat different in my game. There are only boons and each boon is separated into different categories like: fighting, non fighting, useless at endgame. You have to pick 1 boon from each category.

Note: Maximum inventory weight is 20. Having 10 or more item weight results in you being unable to fly.

The game might be permadeath. If the game is permadeath, then levelling up or progressing would be faster. If not, then progression would be slower.

Players can also wield weapons of their choice. Only daggers to small/short swords/spears. No heavy weapons (axes, greatswords, hammers)

There will be PvP in the game, but you can progress off of NPCs. Players would give 2x xp. I want players to have a balance of PvE and PvP.

Items
Players will be able to find and make their own armor and weapons. No metal/heavy armor or large swords/spears. There aren’t any “ultra rare ancient” items because of how far back in time Avian Legends is set to the point that history and lore don’t really exist.

The players would be making these weapons, possibly with magic infusion using a hidden method. There might also be no ultra rare ancient equipment all together. (havent decided on if players make the lore weapons or no special weapons at all)

If players would make the ultra rare items, I could either have an in built system or the weapons could be sent to (a) developer(s) and have manual approval.

I might make it so that the legendary weapons are one of a kind. Players will cough up insane overpays just to get the one copy weapon (could be a black market disaster).

Players and their elements will have skills/moves similar to WoM system. There are be some moves (for example: claw grab) exclusive to certain elements.

Players can also form clans. Clans are free to make and there is a 90% crossfire/friendly fire damage reduction, meaning that accidentally hitting allies will only deal 10% of the original move’s damage. You can also tag players as allies, meaning that you can quickly apply the crossfire reduction without having to leave your guild and join theirs or invite them.

MAKE A REBIRTH SYSTEM THEN.
think in something else

you can choose to wipe your character for some benefits?

actually now that i look over this fr this sounds pretty promising, sounds like a cool mix of Deepwoken and WoM/AO with uhhhhhh bird people. Could turn out pretty well if you could get a team of decently skilled developers

I mean should I be complaining…? after all…

(Totally not complaining because of some secret related to my art…)

A HAHAHA UH NOTHING IGNORE THE LAST PART HAHA…!!!

You didn’t see anything…

Yo a water magic avian(reference to sweat)? Also idk what the secret is

Don’t tell me…
Did you go a little overboard…

Look archen
If you add permadeath
PLEASE PLEASE add some reason to NOT kill people(even more with the 2x bullshit)
Like, gaining some type of bounty, an make that much heavier if you kill low levels
Or this might end like deepwoken where killing and betraying anyone you see is actually very rewarding

What i have to say, just be careful about making all these ideas, sharing them and putting them out, and then never doing anything with them and moving onto the next idea. It is very easy for people to constantly jump from idea to idea but never work to bring anything to life, and i think it can make a real lack of motivation to actually try and bring anything to life if done too much.

I hope if you do like this idea, you can pursue your creation but if not, just consider my words

The descent into insanity