Changing your roblox user as a guild leader

quick summary:
after changing my roblox username, i am no longer the guild leader on my guild and it’s stuck to my old username.

detailed:
alright this bug happened to me in like september but i never made a report. anyways i was the leader of my small guild which included like 2 friends and an alt. i changed my username on roblox from iIoveadaline to 6akvi. after changing my user, i never played wom on my already made characters. instead i made a new character (on the same user: 6akvi). i later on invited my new character on 6akvi to the guild from my alt account which was a co-leader rank. upon joining the guild, i was expecting to automatically be giving the leader role as it would have happened if my user was iIoveadaline. but instead, it did not recognize me as iIoveadaline and saw me as a new guild member: 6akvi 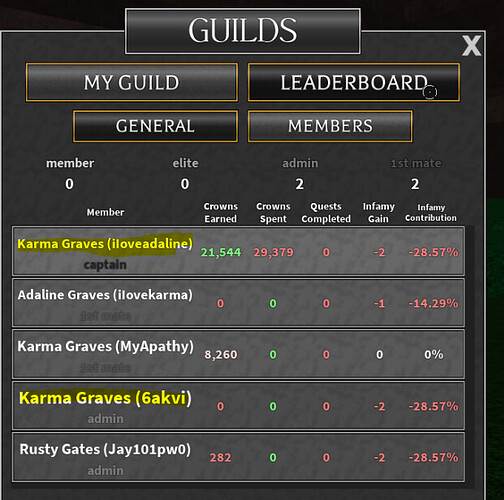 so then i promoted 6akvi up to admin rank using my alt account (MyApathy). i tried to make myself leader but i couldn’t. i hopped on my other characters that had the leader role, but since my user was changed to 6akvi, i was recognized as 6akvi the admin on those accounts as well. so basically, ive forever lost access to being the guild leader on my guild. i can’t even be a co-leader because only leaders can make co leaders.

Big f, it’s a known thing that it cause many issues but still sucks that you were affected by it. 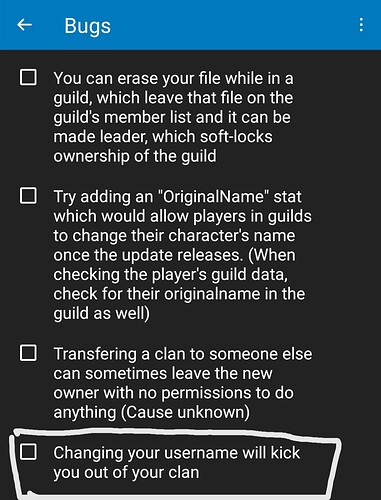 yeah and the guild leader role is locked to my old user ‘iIoveadaline.’ it didn’t transfer to a co leader or anything so now no one can be the leader.