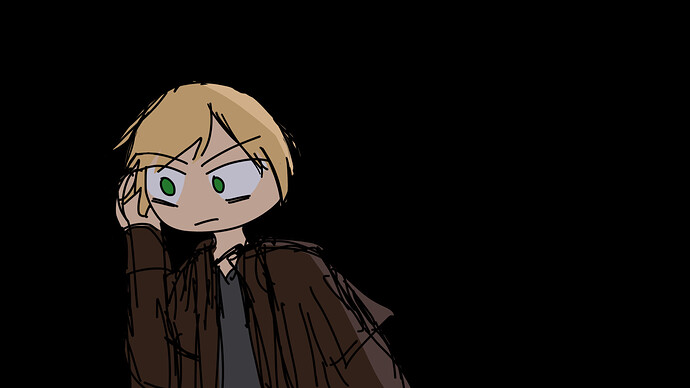 Whether you wanted Carson safe or not, I wish you the best with your decisions.

Carson had another idea. He headed inside John’s room, stole a pen and paper, and wrote a letter. It had been a while since Carson last wrote, so he hoped his scribbles wouldn’t be too unreadable. He had heard complaints about his handwriting since childhood, and he didn’t want to do anything about it—until now.

Aside from worrying about its readability, he wanted to keep this letter brief. Brief enough to let John and Virgil know his whereabouts, and hopefully enough for them to not worry about his well-being.

After he wrote ‌a promise to return eventually, he placed the letter in the living room, grabbed the items he packed, and snuck away from both the house and town. Sure, his attire could pass for a wanderer of sorts, but it couldn’t hurt to not let anyone spot him—with the help of Wind Magic sending him away from the town as soon as possible.

Once he’s out of Ironport, he headed into the woods, looking for the spots he remembered traveling past when he was a bandit.

For the first spot he remembered, it was a bandit camp that didn’t belong to the Sun Rage bandits. Just seeing its grey symbol was enough for Carson to back away from them as silently as possible. This belonged to one of the Sun Rage’s rivals, and he didn’t want to ignite a fight anytime soon.

And he continued to look for any marks of the Sun Rage bandits in the woods. And along his way, he picked up a few spare coins and rocks that caught his eye—it couldn’t hurt to hoard smaller things. When he arrived at the Bronze Grasslands, the most that resembled a bandit camp was an abandoned building. And he headed inside to steal a few irrelevant notes and a cloak left behind—just in case. It couldn’t hurt to hoard those, either.

After what seemed to be a whole evening of traveling from the grasslands, and into the woods he hadn’t stepped on, he spotted the flag with its sun symbol he remembered well, brightened by the already-lit campfire.

As he lurked among the woods and watched the Sun Rage bandits’ camp from afar, he noticed it had already been the time bandits were gathered. Right now, he tried to locate a familiar someone with red hair among the people—and there he was, Markus. With the way Markus’ steps seemed less energetic than what he remembered, Carson knew it had been a tough day for him‌.

Once all bandits were inside the camp, Carson waited for some moment to make sure there was no one outside. Then he approached the camp structure and hid behind a wooden wall.

As Carson eavesdropped on the group reporting today’s tasks, he remembered one thing: Carson had told no one he left the group, except for Ace. But it’s not like Ace would come over and ruin this idea ‌soon. Carson could just hide away his items, adjust his attire for a bit, and head back to the group. He could rejoin the group again this way. A few explanations mixed with some lies should suffice.

While he was trying to not use his magic—just in case any of these people could sense his magic energy—while eavesdropping, he heard Markus’ voice.

Carson was tempted to surprise Markus right here and now, but he had some other ideas.

Once he heard a certain order from the group, he leaped away into the woods and hid among them. After this order, the bandits would head outside, and scout for any potential intruders. And knowing them, he knew how to throw most of them off.

With the help of his magic, he fired a coin he stole across the woods away from his direction. Its impact was enough to make a fragile branch crash and fall, and enough to distract the scouts for a moment.

Once everyone’s attention was on the broken branch and a lost coin, Carson hid his bag in a bush, and snuck among the camp’s wooden structures and boxes. Once he located the spot where no one would check until the next morning, he hid there and looked for Markus.

From where he was right now, if he timed it right, he could make his appearance and went on with his plan to rejoin the group, with minimal suspicions. He spotted a leader among a few other bandits. But Markus wasn’t there. Seemed like he headed outside along with the ones who did.

But sooner or later, some of the scouting ones—including Markus—returned to the camp. With the way Markus isolated himself away from the rest, Carson could try sending him a message.

What should he attempt doing next?

NOTE: Since I started uploading this story on Royal Road, I’ll be letting the readers on Royal Road vote on the story’s options too. The poll results will be combined from both sites.

So yeah, this doesn’t mean the readers on Royal Road and the forum will get different versions of Lost Things, if the poll results end up different.