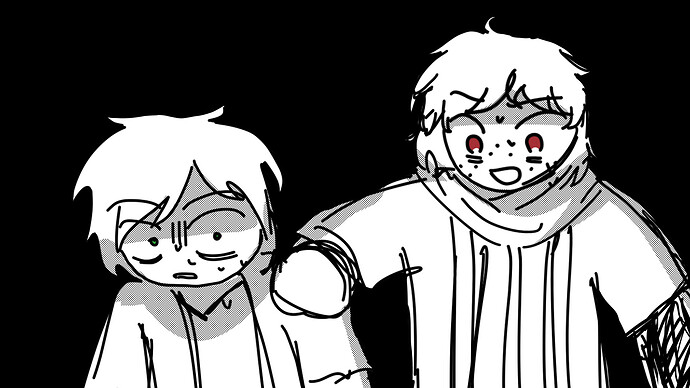 In the last poll, the option where Carson tries sending Markus a message won.

As he wrote ‌a few letters on a small paper—each one as a code for the spots around their camp, he watched Markus’ movements while remaining hidden.

The other bandits were roaming around the place, so if he didn’t want anyone to spot this letter, he better send this letter away quickly.

Folding the paper into a small piece, he fired it towards Markus with the help of his Wind Magic spell. With the way Markus grabbed the letter and kept it hidden in his palm, Carson almost relaxed.

Once Carson noticed some bandits approaching his hiding spot, and was about to uncover him, he knew he screwed up.

In the heat of panic, Carson cast a Wind Blast toward them, before getting out from his hiding spot. As Carson’s sudden appearance alerted the entire camp, he fired his spells back to knock them away as he made his way out of the camp.

As Markus followed Carson, he summoned and threw a few Fire Blasts toward the bandits who almost caught up with them. Carson then grabbed Markus’ arm and ran away from the camp right here and then. As he was about to run, he caught a glimpse of the camp being burnt.

While Markus was fending off the others with his magic, Carson looked for where he hid his bag and quickly snatched it away. And they continued their escape into the woods.

“When did you—” Carson asked, looking back to see if anyone was following them, before pulling Markus away from the incoming arrows—“get fire magic?”

“Yesterday—” Markus turned back, checking for any pursuers as they continued to run—“I guess?”

Knowing that Markus wouldn’t have the time to hone his magic, Carson pushed Markus ahead of him as he turned back. “Leave those guys to me. I’ll catch up.”

But Markus didn’t run, as his Fire Magic circle glowed in his palm.

As Markus yanked Carson’s hand away, his flame spell fired across them—towards the direction they were running away from.

When Carson noticed the flames catching onto something, he grabbed Markus’ hand and ran away as fast as he humanely could. Out of every ‌way to die tonight, he can’t let both of them die from a forest fire, and he’s not going to make Markus’ flames any worse with his Wind Magic too.

If Carson recalled his route from the Bronze Grasslands to these woods correctly, there would be a river they could use to escape with—if case Markus’ Fire Magic could really burn this place down.

As they came across the river, both didn’t waste their time crossing the wooden bridge. And once they had passed the river, they arrived at the Bronze Grasslands.

When Carson turned back to check for anyone who followed them, he didn’t notice anyone. And they didn’t burn the woods down too.

As they had a moment to catch a breath, Carson noticed a town from the southeast, nearby the river they just crossed. If his memory served right, it would be Bell Village. He hadn’t visited the village before, so he couldn’t tell if they would be welcome here. He could hide Markus’ bandit-like outfit away somewhere and head there, but the pursuers could be nearby too.

Aside from Bell Village, they could stop and rest at Mount Seawatch on the east. He hadn’t used the mountain route today, so he couldn’t tell if there’d be any other bandit camp there.

They could just head back to Ironport, back to John’s house, if Carson and Markus got past any wizards and bandits who roamed at night.

As long as Carson could get them a place to sleep tonight, he’s happy.

What should Carson do next?