In this topic, you will be able to find information on bosses within the game. Anyone can edit this if necessary, and if you make an edit I would appreciate it if what is done is specified in a reply. Small edits such as typo and grammar won’t need specifying.
Suggestions on adding things and feedback would also be appreciated but are not necessary.

The Minotaur is a notorious criminal who was born an Old Sea Viking, and now wanders Magius in his mission to become the strongest man alive. He is part Vastus, which makes him much larger than normal, and he earned his nickname due to his helmet and “bull-like” attacks.

I’ll add some parts of that in, I won’t be exactly copying it but yeah my intention was for a short summary and minor details.
Pictures I’m unsure of. Might be useful.

I used the powers the wiki gives me to add Minotaurs level and hp, it’s written in a format that can be used for later bosses that are magic users.

I might add in a future change where bosses will gain more hp based on how many are fighting, but I don’t have an area for bosses in general yet due to how little we know.
For now, I’ll specify that that is his base hp.

Added crown information on The Minotaur and The Exiled.

I had heard he had an attack but I needed the gif to describe it, lol.
Thanks.

The bleeding damage is actually 6 with an additional 10 due to the limb loss, and after enough tried I managed to screenshot the kick’s damage.

i myself see that he actually gives around 10 dmg bleeding

Bleed when you lose a limb is set to 50 damage over 5 seconds.

Here’s a picture of the minotaur if you need it: 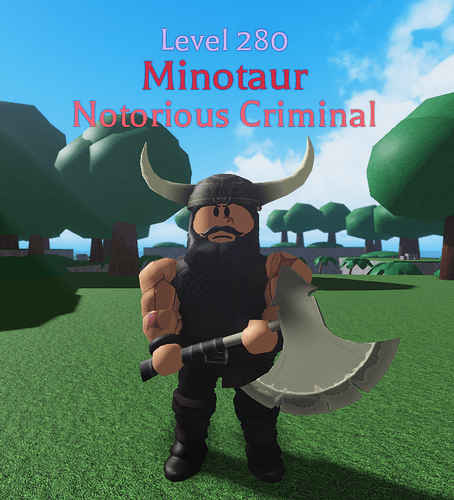 Hmm, maybe a picture would help after all.
I’ll add them in.

I didn’t know the Exiled exists. Is there any pictures of it?

Not yet, there will be.