Someone Among Us (Among Us X WoM) [Prologue]

“Red’s sus,” a certain green creature said, its appearance vaguely humanoid, in what appeared to be a spacesuit.

“Agreed, I saw him jump into the vents at electrical, and I saw blue’s body” The same creature replied, but purple instead"

“Self-Report” the “Red” they referred to retorted. “I Was at Cams, there was nobody there”

This caused a commotion between them, “Yellow” speaking up. “There is no cameras at Electrical”

Outraged ensued, and Red was set to be ejected from the ship

“Wait what if-” Started purple, but he never got to finish his sentence as “Red” was ejected

As Red sailed through the vacuum of space, he swore to slay every last creature as an act of betrayal.

A Large mushroom cloud appeared over the ruins of a once-grand city. when the cloud cleared, only the remains of corpses of magic council scouts and a camp remains.

A Wizard known as Ignis walked free, with a fiery-ashen glow over his hands.
“Free, at last. I Shall seek revenge for these years they have kept me oppressed”
He Started into the sky. a Red Shooting star was blazing across the sky, burning with an intensity never seen by any in shooting stars. Was it perhaps a sign of his fate and revolution against the unrivaled magic council?

what the fuck
It’s beautiful. I am glad the art of shitposting has not been lost with me 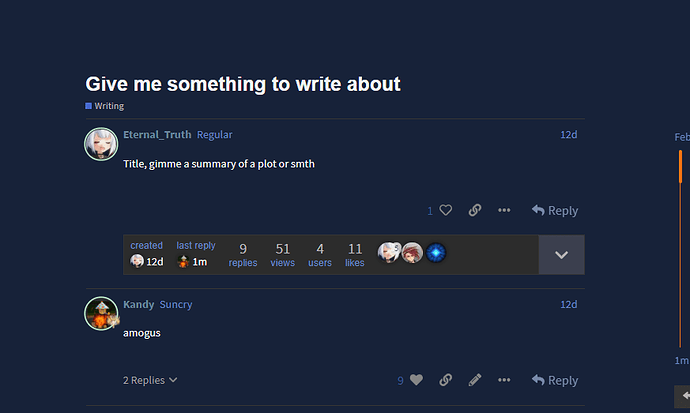 This is the prologue, part 1 was just releasd