To start off with I shall explain how I believe professions should be unlocked and how their progression works.

Now onto the juicy details about each profession.

Professions that I don’t believe will work & why.

And that concludes my thoughts on the matter, please feel free to give constructive feedback in the reply section down below so I can tweak things as needed.

Your thoughts on what is currently written?
( please read the post before voting )

1 Like
My Proudest Accomplishment On The Forums
( Alchemy Edition ) Nums's Ideas On Professions
CoffeeAndNums April 7, 2021, 2:13am #2

Editor’s Note :
Posted it earlier than I should’ve, got clowned on and had it moved to game discussion so that I could work on it a bit more.

" The maker of this post is now in the corner of shame, drinking a cup of coffee and eating salt. " 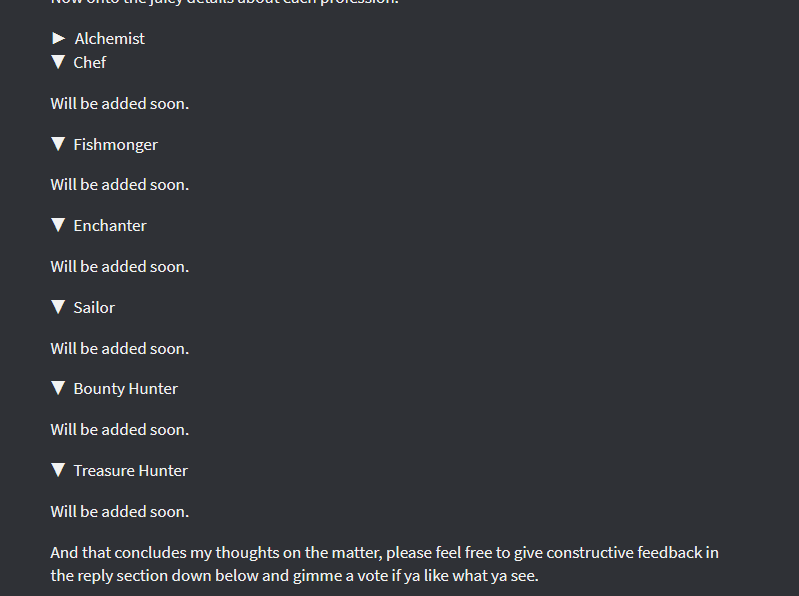 lol, yeah I’m about to start typing those out now that I know how it’ll format.

Ill be waiting, though not for Bounty Hunter and Treasure Hunter??

feel free to give feedback on the alchemist section since I already typed that one out.
& the Unlocking Professions & Profession Progression sections.

you can only choose one profession though

Wait that was confirmed?
Didn’t see it on the trello.

are you refering to this part?

“Profession trees - A few categories of professions that players can choose. Every few levels, you would be given a point that you can invest in one of these, which will give you a buff of some kind. At the end of the game, you will ideally have enough points to fully max out one profession, and have enough points left over to get another profession to 50%. The profession types and buffs will be thought of at a later time”

oh yeah forgot about that mb

but we still won’t be able to unlock every profession

( Ideally the player should be able to unlock and level up every profession. )

thanks for letting me know, I just added a couple things to address that.

Health and stamina regeneration would affect pve/pvp which so far aren’t supposed to in the trello. I don’t mind it but wanted to point that out. Cause potion dealer

That’s all for today, I’ll work on it more tomorrow when I can come up with more good ideas.

that way I could get feedback while I’m working on it to produce a better suggestion overall, plus I also wanted to see how it’d format.
Another reason is that when working on large posts I’m always paranoid that my work will disappear or I’ll accidently delete it. That’s just a me thing though.
It wouldn’t have killed me to work on it for a couple more hours before I originally posted it though.

The only one you actually have a choice in seeing whether it should be in or out of the game or not is bounty hunter. Everything else is confirmed.

I know that? that’s just my opinion?

Then why would you leave out a profession that would be in the game? That just neglects the point of your suggestion.

I suppose it does look like that, now doesn’t it…
I’ll be writing a section within the suggestion explaining why I don’t think certain professions should be in the game.
Admittedly I released this suggestion a couple hours sooner than I should’ve so ya getting that take away from it, is on me.
My bad mate.

where are the other professions bruh