A real fix to the scaling of percentage stats

Aight, so nobody reads long suggestions, so I’ve done my best to make this one short.
Unfortunately, most people on this forum probably can’t be asked to read that either, so I’ve made lots of pictures to hopefully capture your 20 second attention spans.
If even the pictures are too much for you, you can scroll to the bottom for a tl;dr.

To start with, I’m going to assume you know that:

If you disagree with either of these statements, you are objectively wrong.

So how do we fix it?

So if we can’t scale the percentage stats without them being useless at low levels, overpowered at high levels, or pointless to upgrade at high levels (or a combination of all three), what can we do?

The answer is simple: Don’t scale them.
Put a small amount of power, defense or strength on every item, and scale that instead. 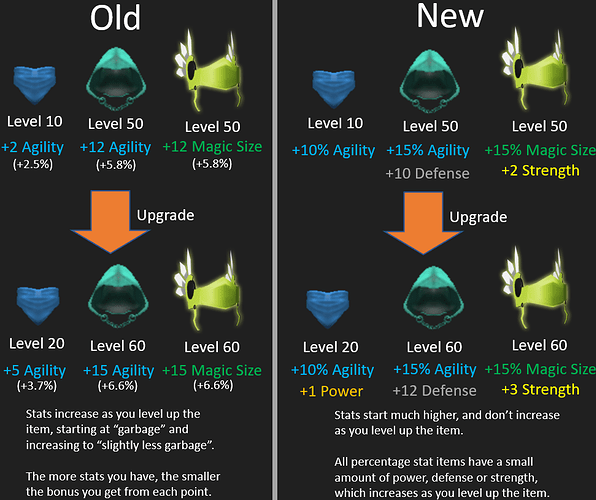 This has many big advantages:

I don’t want to change how amulets work for the linear stats, so I’ve instead replaced amulets with charms.

yoooo so much detail
definitely voting
much effort very wow

Dont readed, fuck you
Ok just kidding i readed, but kinda fast
The removal of stats increasing on level is good i guess?

We could definitely use a more intuitive & balanced system like this.
Right now the current system is confusing for both new & old players and as ya mentioned a potential balance issue later on.

Ya get my vote.

Your tl;dr is bad.

So, this is my tl;dr of your post. Please correct anything I got wrong.

Agility, magic size, and casting speed remain constant when upgrading. So upgrading a level 10 item that gives +10% agility to level 20 will still give +10% agility. When you upgrade an item, it will now give either defense or power. 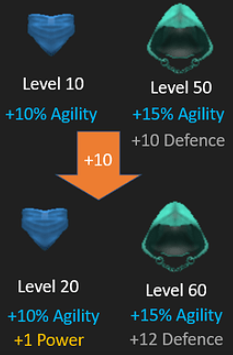 Each item will give an unchanging amount of agility, magic size, and casting speed. Power and Defense increase as the item levels up.

You can still get more agility at later levels, because items that require a higher level give more of their respective stat.

my tl;dr is flawless smh

You pretty much summed it all up, but strength doesn’t improve destruction anymore - it can be found as a secondary stat on other items though.

good suggestion
i can now have a decent casting speed build

how much of an increase are we talking on enchantments though?

Pretty great suggestion, does the percentage increase per point against “percentage stat” apply to all rather than agility? Even if that does not really apply to all, I would be up for more variety within combat rather than defense and power. Although you are right with this kind of stat changes in the higher levels since the stat numbers would have to cap as a precaution prevent islands from being constantly nuked at that point you would have to invest in a full power set with the increased stat of your choice. And you are right about the timing of this kind of change due to the coming of TGR in which Vetex has to recode most of the items.

contents Aight, so nobody reads long suggestions, so I’ve done my best to make this one short. Unfortunately, most people on this forum probably can’t be asked to read that either, so I’ve made lots of pictures to hopefully capture your 20 second attention spans

how much of an increase are we talking on enchantments though?

Currently, nimble and bursting provide +3.5% at level 90 (keen and swift are +1.6%), and powerful and hard provide +10%.
Looking back, I probably overtuned the actual items, and undertuned the enchantments, but also I can’t be asked to change the pictures and the stats aren’t super important for this suggestion - it’s mostly about the scaling.

Assuming the suggestion was implemented as written, your casting speed build would be going from +24% to +60%, but if vetex gets off his ass and adds any casting speed items aside from the canvas hat, that’ll shoot up to something more like +80%.
No matter the details, this is a huge buff.

Pretty great suggestion, does the percentage increase per point against “percentage stat” apply to all rather than agility?

As far as I can tell, every stat except power, defence and strength currently scale the same way as agility. I can’t test stuff like knockback too easily, but I have a lot of agility data and the other stats seem to match it.

Hey, this would work really well.

Scaling would be a lot less funky and we will no longer be in the dark in terms of how effective each point is since we’d see direct percentages instead.

The only concern I have with this is getting in implemented since you’d have to set stats for every single individual item and change their side stat scaling.

around 81 items that would need to be changed

Actually only 46 - about half of all the items in the game are pure defence/power/strength.

Honestly, it would probably take longer to replace the old scaling with the pure percentage thing. Most items are near-identical, there’d be a lot of copy+paste.
Changing the stats on 46 items would be a boring way to spend 10-15 minutes, but it’s a small suggestion compared to a lot of stuff posted here. This isn’t as big as it looks.

The tl;dr conviced my monke brain

What about stuff that already has multiple stats, will they receive a buff of some kind as compensation?

There were pictures, so I’ll give you a perfect score.

Depends on the item. Broadly speaking, these items should be getting buffed enough by the fact their percentage stat “half” is being made useful.

While a Warrior’s Coat might have defence as a secondary stat, it’ll have way less than Sunken Armor, which has two “primary” stats.
They’d both be equal on magic size (as they are now), but sunken armour will also still be the best defensive set in the game.

I’m honestly worried they’ll be too strong - currently it’s all balanced by the fact the percentage stats are useless, and so they don’t really add any value to the armour.
This suggestion would turn sunken armour’s +10% magic size into something more like +30%, so it’ll be way stronger.

Idk about agility, that’s a weird topic.
But magic related stats like magic size/speed would make more sense as just set percentages throughout the whole game, I like that. At low level, having stats only increase your magic stuff by a tiny tiny number based off of the tiny numbers of a stat through a formula, you’re not going to notice a different at all. If your magic blast is already small, you’re not going to notice like a 5% difference in it. It would be pretty much useless. Having set percentages that go up a decent amount throughout the game seems much better for lower levels. Something like 10-15% won’t be too op if you don’t have much to multiply off of. Plus it’s actually noticeable.