Average Day in Magius: Story Simulation - Chapter IV: The Half Way Through

Oh, well.
Let’s continue playing along with your choices, shall we?

With the familiar silhouettes on the hovering platform that just flew away from the Silent Tower, Rael sprinted towards them.
They must be whoever Rael thought they were. A horned giant and a magma user. He had met both of them before for sure.
He cast a wooden beam spell to the platform, grabbing the two figures’ attention as the platform swayed. But even with their struggle to keep their balance on the platform, they flew away towards the forest, prompting Rael to continue his chase.

Since Rael left the Silent Tower area on his own, Hifumi had to block Issac’s magic attacks, then threaten the soldiers who tried to go after Rael with his flame spells. Jean crashed into the ground moments later after being sent flying.
As Hifumi continued to handle this fight, a metal coin fell down from the torn wall on the tower, towards the crowd of people trying to stop Hifumi.
Hifumi took notice of the dropped coin, and let it do its own job as it bounced, and finally fell down flat.
A magic circle emerged from the coin, seeping into the ground, surrounding the crowd. Later, the blaze from the magic circle ignited everyone in the magic circle.

The same blaze ignited from where the coin was dropped too, but with the addition of smoke floating out from there.

While the people back in the Silent Tower were caught on fire, Rael continued to chase after the platform through the forest, trying to take it down with his beam attacks. He didn’t have the time to think why there was no one coming after him, or where he was right now, as all his focus was on not crashing into trees and taking the hovering platform down.
The people on the platform wouldn’t give in to Rael’s spells soon, as the ones on the platform grabbed it, trying to control and revive its dying flight despite the attacks.
Rael couldn’t figure out what they’re discussing on the platform, but he didn’t stop his attempts to take them down. He continued attacking until a hit forced the platform to drop its pace, and fall.
But as the fall took place somewhere away, Rael followed it, until he arrived at a beach. Upon noticing two figures recovering from a crash in the sand, he attacked them with a blast.

The blast hit the giant, or as Rael recognized upon getting a closer look—the Minotaur. But he didn’t have the ax with him this time, and had the prisoner outfit on. As the Minotaur was about to approach Rael, the other figure—Kat spat out the sand and ran towards him, dusting some sand off her clothes, followed by a punch to his face.
Rael grabbed and yanked her arm away, followed by a punch in her gut. As she lost her balance, she pulled him down to the sand with her. But Rael pinned her down first and gripped her throat.
As she struggled, Rael only glared into her eyes, his nails digging into her throat.
Kat’s rage grew as she mustered her force to shove Rael away. The fact Rael was supposed to be her lost twin only added to the anger. Not just towards Rael, but her entire family. Thousands of questions to be asked in her head, they all subsided by the wrath.
Following a hoarse scream from her throat, she pushed Rael away, and punched him to the ground. And Rael blasted her away with a wooden blast spell, leaving a cut on her face. Kat then jammed his face back with a magma blast, and dragged him to the sea as she continued melting his face with the attacks along the way.
As he’s dragged to the sea, Rael gave her more cuts with his wood spells as he forced her grip to release him.
By the moment Rael made her drop him into the sand, she carried him on her shoulder, and slammed him into the seawater.
The sea boiled Rael’s melting face as he panicked, and Kat pressed his face into the waters, drowning him.

In the seawater, Rael’s energy started to fade away as Kat pressed him down further and further into the sand. He could only hear muffled words from Kat saying something with the Minotaur from a distance away. Later, he heard Kat shouting as a voice resembling Jean’s joined in. He couldn’t see what’s going on above the waters, but only if his remaining physical energy would listen to him, he could’ve saved Jean.
Despite his impending blackout drawing closer, his consciousness hadn’t given up.

He walked into this whole story himself, starting from the time he hunted down the Minotaur—No, it’s way back to his bandit beating days. Or the day he unlocked his magic and shot his hut down, even. And he had been playing along with the given role since then, so why couldn’t he just get up right now?
Was this a sign for him to stop?
Was this supposed to mean something else Rael hadn’t bothered thinking?
But no matter what this could be, he had two options: 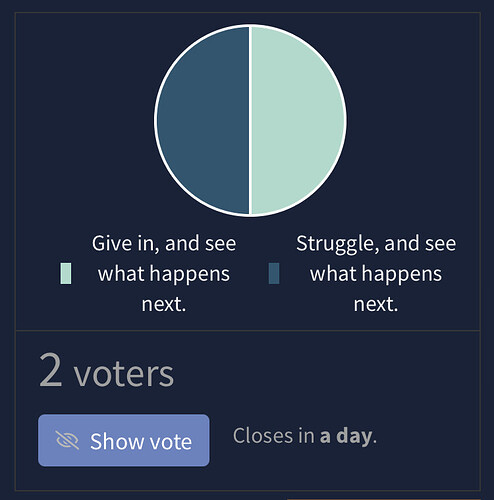 Whoever you are, other voter, we are two very different people