My first post about this
My second post
and this will be my last about my no magic file, until AO comes out. 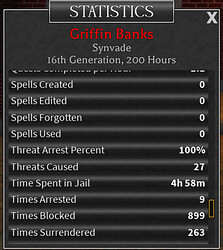 In my previous topic I said I’d do another post like it when I reach 200 hours and then I’m done, for good reason too. Nothing new to really add. The only thing I can do really is just increase my stats by killing kids, grinding chests, and farming bosses. There is no real incentive to really play any further than this. I have done almost all that needs to be or could be done. By no means I’m the best PvPer or the richest person in the game but I am well off enough to be content with where I am, especially given my vow to not use magic (though that affects my pvp abilities more than my money-making ones). 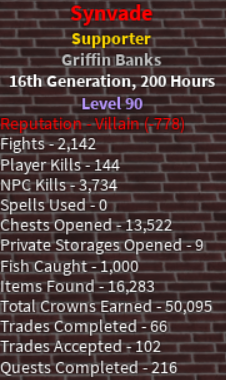 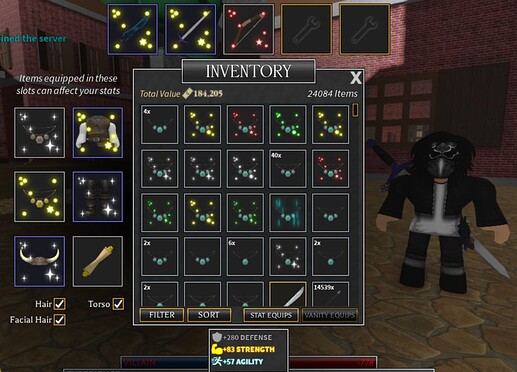 I probably will be taking a short break from WoM/not playing as much, mostly due to the aforementioned part where I explained how I’ve done just about all I want to do. Might do some periodic PvPing, maybe some item/boss farming, but I think that’s about it. Props to those guys and gals who can put 1000+ hours into files, don’t think I really can (till AO comes out

The only item I changed in my inventory is the bow, from Powerful to Swift. Lose like 10 damage but I can spam it like 25% faster and I’m pretty sure but not certain that arrows fly faster with Swift, making it the superior option imo. Arrow spam gets the job done, 84 nigh-unpunishable damage

Thought about getting strong mino gear for a completely strong set but idk if I’m willing to give up 108 health for +5 damage to my arrows, +7 damage to Rising Tide, and +2 damage to each Raging Storm slash.

If you haven’t done a no-magic playthrough and you’re bored of WoM then I heavily suggest you try it out. It’s fun, amazing even, at the start to when you complete the story. Is it pointless? Yeah, but it’s still fun as all hell. To feel the struggle, to adapt to something you’ve never done. It’s almost like playing a different game (until you get arrows and they basically become blasts while Great Spin become self explosions). My next two topics are (very likely) going to be a weapons tier list (which I’ll get butchered for) and an explanation for my “guild” (which I’ll get butchered for)

Alright, have an amazing day to whoever read this!

That shits easy all you need is a sword

or should I say the Oathkeeper Broadsword?

The only hard part is like the first 20~ levels tbh

I’m guessing the crazium of Magic Council and Bounty Hunters?

now do it with no magic or weapons no cause you do 10~ damage per swing, if you’re lucky sometimes, cause the nerf to weapons makes weapons in early game so weak, without strength gl doing decent damage

that’s what I call an ez lose

if anyone can do it, it’s OneGuy

I actually started to do this, got to level 35 (didn’t even use the double XP code). Then I started the hero storyline and realized you cannot agro dark wizards by approaching them when you start the hero storyline’s first quest; so I deleted the file out of rage. Might try it again.

I made a Magma and a Plasma Wizard I wonder which magic could fill the 3rd slot?

This is going into my history file

if punching was added

Pov: 400 hours without Magic or Weapons

if punching was added

no, just a melee tool 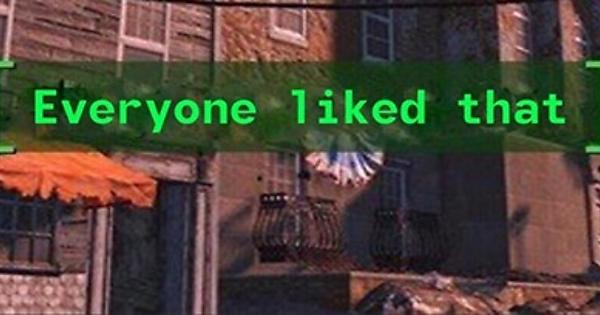 no, just a melee tool