⚓ The Odyssey Feed ~ A Wave of Development! 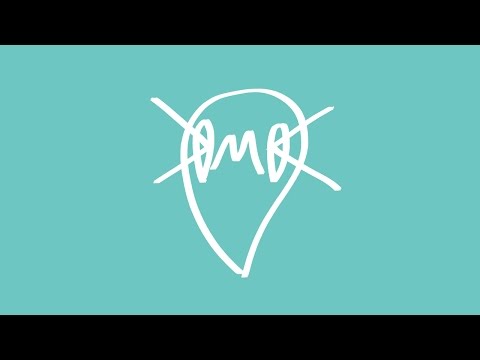 . Welcome back to another anchor of The Odyssey Feed! We’ve got some exciting news to cover this time around, so let’s dive in

First of all, we have some details on the newest skill; Shot! It’s a short range AOE similar to a beam

. Nice how it still fits with the theme of the Fighting Style moves so far

. Adding to this, the visuals in general have been improved and adjusted!

The third piece of information in this version is a pretty good one; there will now be more Criminal Shipwrights scattered around the Bronze Sea, though not much information is specified

. This is pretty great, and means criminals have other places to go besides the one criminal island in each sea if they want to repair their ship 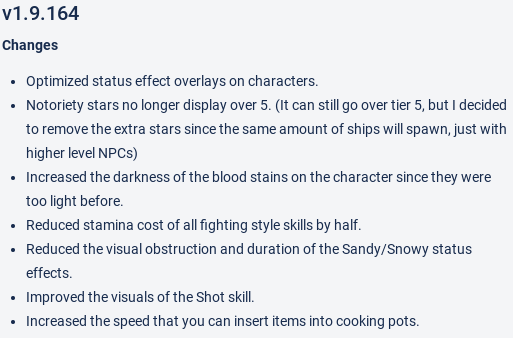 Speaking of visual changes, Notoriety stars will not display over 5. Matches pretty well with some of the other Notoriety mechanics and how it (kind of) caps out in general at 5 stars

Some quick adjustments to fighting styles! All fighting styles skills have been cut in half to better match the cost of weapons. They were quite strenuous before

! Additionally, the visuals of the Shot technique have been improved

If you still do want to cook a good meal to keep your stamina in prime condition, then it might take just a bit less time now, as items can be inserted into cooking pots faster than before 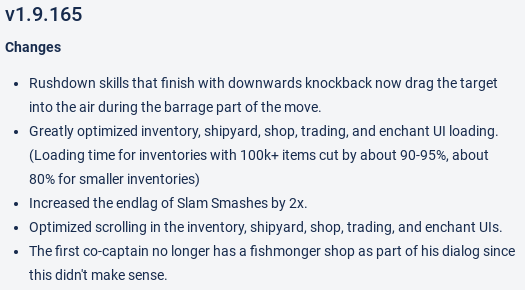 We finally have some details on Rushdown, which was quite mysterious before. It seems to have a barrage part and a finisher with customizable directional knockback, similar to Crash. Neat

Additionally, scrolling through the variety of UIs in the game has been optimized.

Lastly, a few smaller adjustments. Slam type Smashes have had their endlag increased by two times, rightfully so as you could act nearly directly out of them before

. On top of this, Edward Kenton (The first co-captain) no longer has a fishmonger shop. Not sure if it’s been totally removed or if i’m reading it wrong, but perhaps it’s some lore reason

The next version, v1.9.166, is perhaps the longest version we’ve seen yet, requiring me to scroll to 33% just to fit the whole thing on my screen

. The reason for this is because it’s mostly weapon balancing. If you want to see all that, visit the trello yourself. I, however, will not be covering all that since there’s not really a point 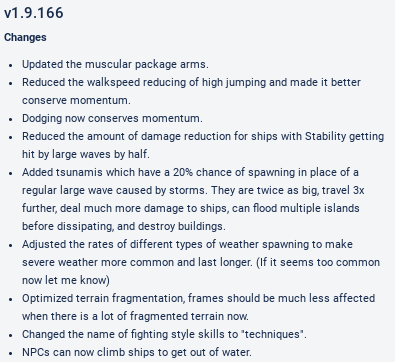 First, we have a change to the muscles gamepass

! The arms will now visually appear different. We’re not sure in what way, though

Next, some wonderful changes to basic movement! Charging a high jump won’t slow your horizontal as much, and your momentum will now be conserved after both high jumps and dodges. Perhaps it feels much nicer than before

Next, ships are now a bit less safe from large waves. The stability stat now has twice less effect on the damage they deal, so beware

! Severe weather is also more common and lasts longer, so you’ll perhaps be finding some more large waves. Danger ahead!

However, this doesn’t compare to the next dangerous addition to Arcane Odyssey

… Tsunamis have been added

! 20% of large waves (This rate has been nerfed in the next version) will be tsunamis, which are two times as big and travel 3 times as far compared to normal large waves

. On top of this, they’re more resilient against hitting land, and can flood several islands before dissipating! What makes them even more dangerous, however, is that they are far more destructive

. Not only do they do much more damage to ships, but they can destroy buildings that they sweep past, as well. The War Seas just got a bit more dangerous!

To match the destructive capabilities of tsunamis, terrain destruction has been optimized, along with frame drops from destruction. And apparently, NPCs now don’t like the water just as much as you do, and will climb up the side of ships to get to you, making them much harder to cheese

Next, a change to fighting styles in general; what before were called Skills are now Techniques

You know how grab attacks are useless against bosses

? Not anymore, since hitting a boss with a grab attack will now deal 75% of its normal damage upon the initial contact

, which is a great solution in my opinion.

, as heat-based magics are getting a great interaction to avoid people camping in water to nullify their attacks. When Fire, Magma, Plasma, and Explosion magic spells touch water, they will create clouds of scalding steam that will damage opponents

Lastly for this humongous version, there’s now an incentive to visit the glaciers created on the open sea by snow clouds; chests will spawn on them! A really neat small addition that adds a lot more than it seems

Most of the things in this version we’ve already covered previously for convenience, so we’ve got just a bit more to go

! First, the cost of using repair hammers is now half as much as it was before

. Because of this, the cost of repairing your ship on the fly and doing it instantly at a shipwright have matched up! Definitely helps a lot.

Next, Crystal Magic has been optimized. You could definitely get crashed by crystal magic captains and wanted NPCs, so it’s great that it will no longer happen

Lastly, we have something pretty big

; the beginning of the Grand Navy

! The rank uniforms are currently being designed. Can’t wait to see future trello notes about the workings of this government!

All Noteworthy Islands
Posted by @SpectreTheFox

With Arcane Odyssey releasing in just a few months, a lot of people have been compiling information about the game, and in this case it’s no different

. Spectre has gone through every public island and analyzed them with all the information that the public knows about each

. It’s neat to read through and gives a pretty good perspective on just how much building we’ve witnessed

Spawn Islands Dawn Island - The player wakes up on this island in tattered clothes with no memories at all, next to a man named Morden who is in a similar condition. Dawn Island looks similar to Newground Island from Arcane Adventures, except a lot bigger. [DawnIsland1] [DawnIsland2] (this one prominently features The Jaws in the background) [DawnIsland3] Redwake - A wooden port town nestled in The Jaws, a cluster of giant stone spires. Home to the Jaw Pirates and the Spire Bandits. T… 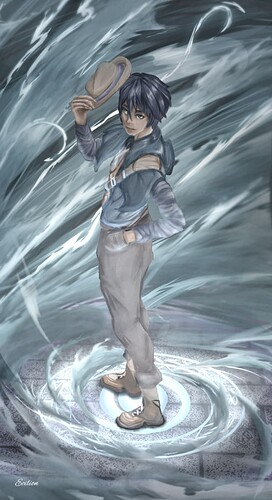 There was a lot of great art this week, but this one just really caught my eye

. Enzo, seemingly a wind wizard, whips up a storm around him while posing with beige boots, black pants, a handsome blue vest, and a beige hat to top off the drip

. Matching with the cold background colors, it’s a sight to behold. Great job

The Assassination Job
Written by @Shellseawing

Assassination is a tough job… and the difficulty of each task can be easily underestimated in the work of killing. Steven takes an assassination contract of a normal looking man with a sky high reward; it’s almost too good to be true

! And with his advanced skills with weapons and wind magic, it’ll surely be enough to get the job done

One of the lights was flickering in a lamppost on the side of the dusty street. The sea crashed against the shore, unseen in the night as a figure stalked through the shadows, hunting. The target was high-value and mysterious, Steven was ready for the simple job. It was cold on the island but no more that he couldn’t handle. The moon was a crescented The contractor had approached him silently in the Assassination syndicate, giving only the pay, the target’s preferred appearance, and last known …

Last anchor’s riddle solver was @Maple! Congratulations for being the first to crack it! The answer was… ”Astra”!

Server regarding The Odyssey Feed, a news thread for Arcane Odyssey on the AO Forums. | 61 members

a few errors here
feel like it was a little rushed but
we can wait if the next anchor takes years we dont care, it is as precious to us as the game itself.

This stuff happens all the time but usually I fix it pretty fast. I always appreciate people reporting those mistakes, though

We got the background music too

oh I just listen to the music on it’s own

Just get a news icon where you can check the latest and previous feeds. This shit needs to be shared in game

For fighting styles, it would be the Knockback option