Progress, progress! The development of Arcane Odyssey continues into our 6th issue! (I doubt it will stop anytime soon

). Not much happens early this week as Vetex continues to revamp. He does fix some bugs however, with things like poison clouds and explosion magic.

(Pic of that here)

But ignore that, we’ve got more important things. Remember when I said Vetex would be showing off the new revamped magics more? Well, that happened! We even get to see more of Redwake, plus what some more magics look like, being lightning, shadow, light, and wind.

Each magic is looking incredible, and we’ll likely be seeing even more this week! I also didn’t realize how huge Redwake is…

This game is going to be incredible. I love the way lightning looks, most of all, being much more realistic… Here are some of the pictures/videos taken from Vetex’s twitter!

There’s the link to the thread. Now to the images. 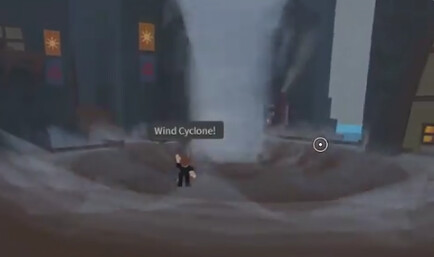 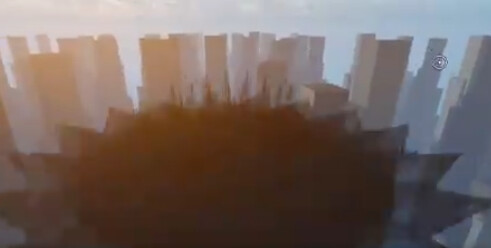 Shadow shockwave self-placed explosion, most likely. Sorry for the bad quality again. ;-; This makes me think what other Shadow attacks will look like, since it’s my main magic.

Here’s light beam. I love the way it pulsates and creates tiny explosions of light within it’s beam. Going to look sick. 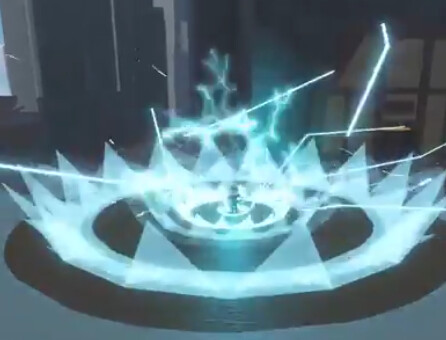 Last but not least, lightning charge. It looks incredibly realistic, and like a real explosion of charge. Loving every bit of it!

If you want better quality, head over to Vetex’s twitter (from the link above) in which the videos will be higher quality for you. Then you can really see what these magics look like in their higher pixel number glory (Someone please tell me how to embed videos without using weird programs

But now… Vetex has actually finished revamping EVERY magic in the game. Finally, we can move on. Hopefully more sneak peeks in the future!

Now we have some more exciting news than seeing the new magics (Though that’s super exciting!) With the end of the magic revamp, comes the start of further update progress. Here’s a screenshot showing a brand new revamped Generations system, as well as a few badges. This could change how we look at generations. Also, lots of people gonna be gen 3 now. Everyone reading this as it comes out will be Generation 2, which sounds pretty cool. Also more scars added.

Also, every generation 2 file (Files that played World of Magic) will be able to rechoose their magic upon playing Arcane Odyssey! I didn’t see this on the trello at first, but I saw this on a topic by @Archer. Thanks for that! This ability to change magics will be helpful, either if you want to change anyways, or maybe because of those new magic looks…

Here’s some more smaller bits. Vetex has also been fixing things such as parts and GUIs not loading, and may put that into WoM later. Vetex has also done cosmetic things. For example, multiblasts with the right hand punch will now switch to left hand every other blast. He says this will also work with other types of casts. Sounds cool!

Also magic interactions with parts have been tweaked a bit. Here’s an image: 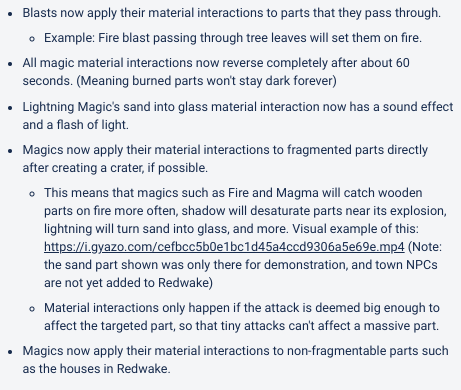 Now for something bigger. You know crystal magic? Widely regarded as the worst magic in the game? Well, Vetex has finally added crystal’s unique status, which grows a crystal on the target, breaking in 5th hit. Not only that, but it has synergies too. 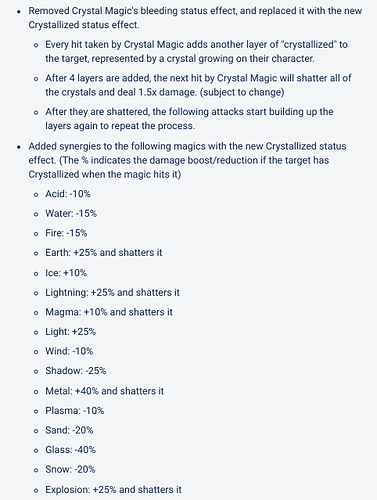 Looks like crystal isn’t on the bottom anymore, and people are reconsidering magic choices across the forum. Especially that synergy with light… I feel like we’re not going to be underestimating this magic anymore!

Also, thanks for @Fluect for confirming that the crystals last ten seconds. (Doesn’t reset the time when you add a new crystal, he pointed out in the comments.) Gotta be quick!

Forum Topics of the Week

An immortal question… What are you looking forward to in TGR? @AdityaCoolDude asks this in his topic. It’s a good thing to debate about. Personally, it’s going to be the new map, storyline, lost spells and accessories for me. Maybe sailing as well. It’s going to be grand on the day TGR releases! (Or an RKing spree

…) Share your thoughts! I’m sure many different people will have different opinions, such as the weapon abilities and exploration, which i’m also looking forward to.

I’m looking forward to it because Promethean Fire

We continue on the trend with the “Person above you.” Though this wasn’t from this week, it’s worth a mention… and made me laugh. Go check it out and try to describe the person above you! No cheating though! By @TheLocalFool. Also, this topic has almost 700 replies. Will this trend continue? We’ll find out soon (But I don’t think so.) For the better or worse? No matter, this was a funny topic.

Describe the person above you from memory Off Topic

I’m surprised how fast this suggestion grew. It just closed, and took a whopping 117 votes with it. Here’s New Spell Type: Constant Beams by @BaguetteCrusader. This is a suggestion showing that we should have a new type of beam. We can hold it, and it will constantly damage enemies inside of it while also draining our mana. Tons of effort and even a GIF was put into this suggestion. No wonder it got so many votes. Seems like a cool idea, and I hope vetex implements this in some way. Congrats!

this is my first suggestion ever so i hope to do it right New Beam spell type So my suggestion consists of something im kinda anoyed of, beam attacks are currently pretty cool, but in terms of beams theyre not very like an actual beam attack, more like a very cool projectile attack, so my proposal consists on making a new type of beam attack that is actually like a dbz Beam How would it work? It would work pretty much like you imagine it, a constant beam that tears down the enemies health in e…

Art of the Week This is pretty dang cool… Modern Wizards Art by @Phi. This art depicts a fire and shadow wizard with a synthwave background. Ever notice how in universes with magic, we have little technology? Here’s something that contradicts that, and i’m imagining a game like Arcane Odyssey, but in the future, in a big city. Awesome art!

Writing of the Week

In our Writing of the Week section in this issue, we have Crimson Origins Chapter Six by @DRobinHood.

We follow the adventures of characters in the Arcane Adventures universe with great description, dialogue, and technique. Great job and fun read!

Savaria, two hours after the escape The AG soldier whistled to himself as he tore a wanted poster off the board. As was standard protocol when someone was captured or killed. In this case, both. Rorik, the “six-shot wonder” was supposedly killed whilst escaping a prison complex in the fifth sea. Apparently, Lieutenant O’Leary severely injured him before his allies dragged him onto a boat. The lieutenant said that his ribcage was close to shattered when he was carried onto the escape vessel, s…

Here’s a Puzzle For You…

Last week’s Riddle Solver is… @Cat_Bread ! Congratulations for being the first to crack it!

This week’s Riddle is…

First to message or ping me with the answer will get a shoutout next week’s issue! No cheating!

Thanks for reading this week’s edition of The Odyssey Feed!

Good stuff, the amount of effort you put into these everytime you do so is really good and it’s very commendable

dang this must’ve taken you a while.

cool art of the week

Indeed, it managed to stay on top the whole week because of the concept

(I believe the time resets each crystal you add.)

Time does not reset

Fixed. Thanks for helping!

I would love it on a google document too, you can mess around with the layout to make it look like a newspaper with columned writing
Photos should be easier too

yeah you just insert it from images or downloads, and you can change the size and stuff, not that hard D:

Aye, finally a replacement for the Herald without the guy behind it being super edgy, pog!

He was the embodiment of /pol/ + Edgy Classmate. I’ve talked to him a couple of times and he confirmed the reason why was because he wanted to become a Leafy of sorts in the community. Clearly, he failed.