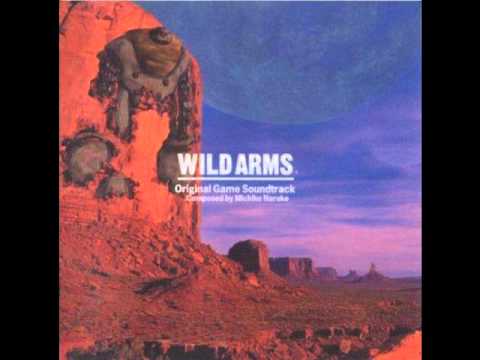 Why hello there. Welcome back to another anchor of The Odyssey Feed

! Let’s not waste any time and jump right in as always.

To start off, we have some improvements to Earth

! Many spells, these being the pillar and sphere explosions, high jump, and beam.

Next up, we have some changes to magic blast attacks

! First, when you cast a blast attack, the projectile visually grows in the air before being casted. There’s a limit to how slow this can happen though, since the timing must have been off for slower magics like gold

. Additionally, blast attacks can only travel half the distance before disappearing.

indicator will not appear for bosses, since it’s strange that it appears after a cutscene where they have already confronted you. Of course, for fighting their mirage after this, they might be getting the first hit on you

That’s right, Earth Magic’s visual revamp, including all the variations, has finally been completed, which means we’re moving onto ice! I can’t wait to see something eventually about how Earth magic looks now… a ton of potential here

! Of course, we just got a magic visual leak, so we might have to wait a bit

Not only this, but after weeks of work and one

emoji, the Fort Talos fight has finally been completed. With the amount of effort that’s gone into this, you know it’s gonna be good

. Oh, and also because of this: 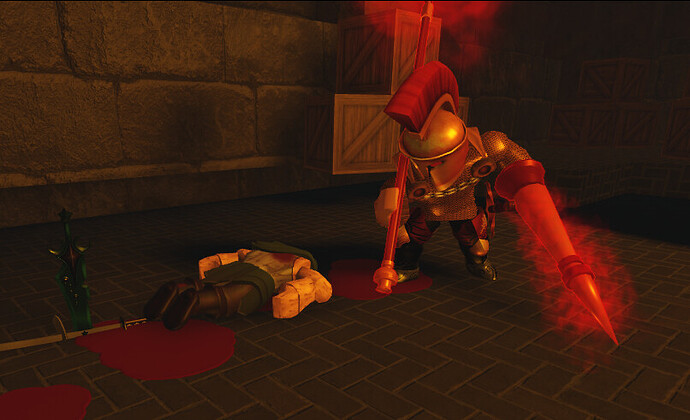 Confirmed to be the Fort Talos boss by Vetex

, we have a terrifying image of the boss standing over the gory corpse of his creator, in possibly the most intimidating stance in any Roblox boss fight conceived

. This was posted in a few places, including here:

how the balancing is going [image]

That’s the hilt of the Cursebane, which is confirmed to be owned by General Argos

. This confirms my thoughts that General Argos and the Fort Talos boss are the same person

. Here’s an image of the Cursebane just so you can see that it indeed is the same sword: 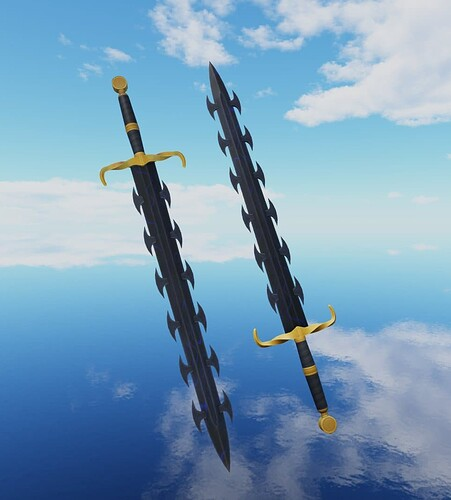 Next, we have this curious part of a weapon.

Unfortunately, the image cuts off and we can’t see the top of it. It’s thought that it’s probably a spear, but it could be several different things

. It’s also seemingly imbued with a red smoke/energy, which appears more at the top of the pole. This shows us that there’s definitely something up there and it’s not just a staff

This last weapon seems to be a lance containing his left arm with that same sinister glow, which we can get a much better look at here. Pretty spooky

! I really wonder what that aura is. Maybe weapon aura or some kind of infused magic? It’s quite interesting. Let’s continue to version 1.9.94

First of all, we can see that there will be exactly 7 drops that General Argos can yield upon his defeat

. They’re not listed, but we can easily see his helmet, chest piece, leggings, his two weapons (Cursebane won’t be obtainable), and cape. We don’t know what the last one is, though

Second, the “Rapier” type weapons have been renamed to “Thrusting” type weapons. The reason I see here is that Argos’s lance will be of this weapon type, since it fits in but isn’t exactly a rapier

. Also opens up some more variety in weapons for the future!

Last but definitely not least, we finally have the starting grounds of the ***ICE REVAMP

!!! *** I am definitely not biased. For this new cold makeover so far, the charging particles have been revamped. Will definitely be more to come

The removal of heavy slashes

. While this means I can no longer do 300 damage with my full strength build and a good ol’ strong hammer, they also forced weapon users into using shiftlock, as trying to turn your camera with right mouse would result in a heavy slash, which is obviously inconvenient

. Overall, this is definitely for the better.

In the last new information for today, weapons that apply a special status effect besides bleed (At least i’m guessing

) show this status effect, along with said status effect’s description when you hover over the weapon in your inventory. This is definitely a helpful tool for seeing what your weapon is specifically capable of in the elemental arts

That’s all for this anchor. Cya guys next time

If you could have a “final smash” of your own what would it do?

As a person who frequently thinks about the movesets of my OCs if they were theoretically in smash ultimate, this is pretty fun to think about

. So what would your final smash be? Personally, as an ice deity, I would freeze over the world and start the next ice age. Unfortunately, this would dramatically decrease the popularity of ice cream

If you could have a “final smash” of your own what would it do? Off Topic

This could be like a magic, or your own custom ability, essentially I’m talking about like your own super powerful ability that cannot be used repeatedly because it’s either really energy consuming or it has some kind of cool-down. Anyways here’s mine as an example: sandals ultimate ability: MAGNUM OPUS The user wields a massive magical pencil to rapidly barrage the opponent with the eraser side, before finishing off by drawing the ultimate life-form that fires a laser of total erasure at t… 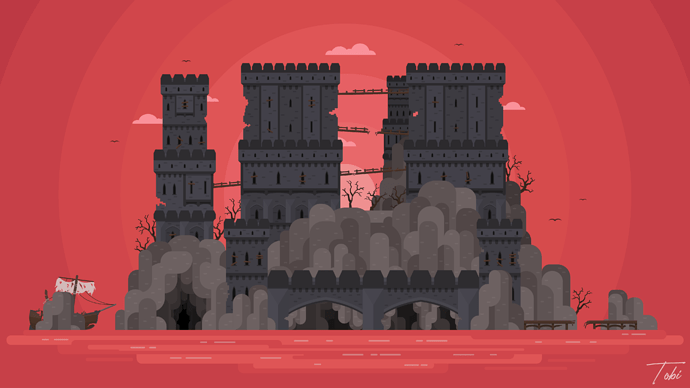 In a rather spooky piece of art, Tobi is back with his flat design series, which I must say have much more “dimension” than just two

! This especially applies in the haunted Akursius Keep. This art makes it look like a cool place to live even, if it weren’t for the aforementioned supernatural properties and a lack of decent wifi

. I love the red tones and the fortress like vibe

[akursius keep_cover] Wallpaper Version [akursius keep] And with this piece, I think I’ve covered all the interesting islands revealed for AO so far. [Tobiemoji_gogogo] Should I do some pieces for WOM and AA? If so which locations would you like to sea? [Tobiemoji_question] Check out my other AO wallpapers:

Here’s another chapter of Lost Things which doesn’t fail to deliver! Not warding away any readers

, this chapter features Virgil enchanting an amulet with an enchantment a bit more dangerous: Warding, which fends off Insanity (as you might know

). This charming chapter (I am going to jail for these puns) contains some great imagery while remaining simple

[image][image] [image] [image] After a few seconds of contemplating, Virgil could go for a warding charm this time. With how it could ward off some of the deadlier side effects of magic, its charming process would be more intricate than the basic charms. Even if Virgil didn’t have to face life-threatening magic every day, it would be useful to have an item charmed with warding around. Who knows, maybe he would end up working with a cursed weapon one day. To cast a warding charm, he must fi…

Last anchor’s riddle solver was @DRobinHood! Congratulations for being the first to crack it!

Server regarding The Odyssey Feed, a news thread for Arcane Odyssey on the AO Forums. | 35 members

Also, is the answer the Trial of Endurance?

Thank you! Crazy to think i’ve been doing this for almost 2 years now…

If that’s the gunslinger one, also nope!

stealing the light curse with averill?

well it was gonna get there at some point anyway

Got it, but what’s the trial name?

(If there’s not one correct me pls)