⚓ The Odyssey Feed ~ In Shape! 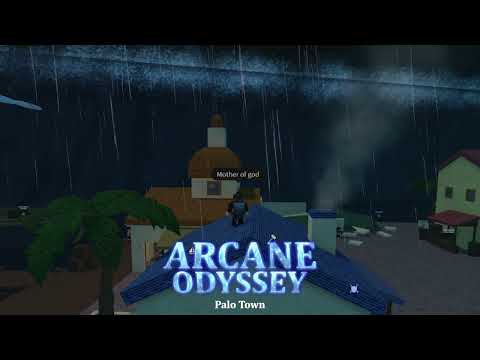 . Welcome back to another anchor of The Odyssey Feed! We’ve got many exciting counts of new information about our favorite in-development Roblox game, Arcane Odyssey

. It’s truly insane just how close it is to release after a 2 year wait… Speaking of waiting, let’s not do that and go 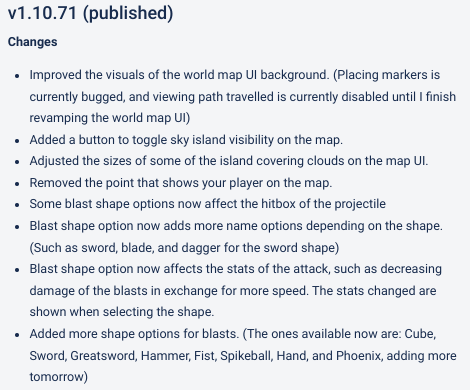 First, we have some new developments to the world map

! The background has been changed and improved

, and there’s also a brand new button that toggles sky island visibility. Quite an essential feature if I say so myself

. He’s also removed the point that shows your player on the map, which I find pretty interesting. It seems you’ll have to rely on locating an island and looking, on the map, at what side faces towards what. Makes it a bit less trivial, so I’m kind of for it

. Additionally, the sizes of some of the clouds have been adjusted… the one for the new island took up half the Bronze Sea

Now, let’s move on to the Shape option! It’s been revealed that not only does the shape you choose influence what name options you can choose from, but it also influences the stats of the attack

. They sound the most interesting to me… what do you think? Quite excited for more shapes to come nonetheless 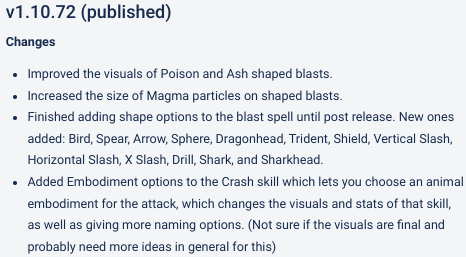 Version 1.10.72 brings some new exciting things! First, there’s just some average magic adjustments. The size of Magma’s particles on shaped blasts has been increased, as apparently they were quite small before

, and Poison and Ash shaped blasts have gotten a visual improvement. Good stuff!

, vetex has added all the shapes to blast spells he wants until the game releases. The new ones are Bird, Spear, Arrow, Sphere, Dragonhead, Trident, Shield, Vertical Slash, Horizontal Slash, X Slash, Drill, Shark, and Sharkhead. You could definitely become Kraken if you wanted to

! Shapes are certainly a really interesting addition to magic that adds a ton of variety and customization

The third addition for this exquisite version is the revelation of the Embodiment option for Fighting Styles, which will presumably be on all the techniques eventually similarly to Magic’s Shape option

. It lets you choose an animal embodiment, which basically does the same thing as Shape, changing the appearance, stats, and naming. A very interesting one

! We haven’t gotten any list of what animals he’s added so far, but it’s quite cool in my opinion at least

Some balancing has been done for the final boss of the Bronze Sea, thank goodness

. The first change makes his placed explosion attack charge for longer so that you can interrupt it, and the second makes it so that blasts firing occasionally while he was charging the explosion wouldn’t clash with yours and make him

, unfairly, impossible to interrupt sometimes which would lead to your death

. Needless to say, this change is very essential.

. We’ll hopefully see some in some images eventually (Or when the game releases, whatever comes first

And here’s the last version for today, and it’s certainly not least! The max level cap has, at last, been raised to 120! Whether it’ll be further raised or not before release is unknown, but it’s certainly a big leap forward from World of Magic’s level 90 cap

. It also unlocks the new things we’ve been talking about, though I’m not sure if I can say so much

Adding on, we have the next two story parts. Chapter 5 parts 10 & 11 are Through the Ancient Mountain, and Across the Tundra, both almost certainly referring to the new island

The very last thing we have is another gameplay video by Soleil! As always with these, I won’t analyze them as it would take 5 proton half lives, and I don’t have that kind of time

. Feel free to watch through at your own pace and analyze! 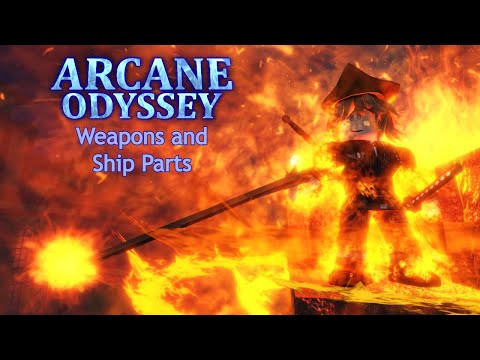 What is the greatest topic you have ever made?
Posted by @DubiousLittleTyp0

If you’re reading this, there’s quite a good chance that you’ve made a forum topic. If not, then I suggest you do and get into our community

! However, assuming you have, what’s the best one you’ve made? It could be funny, witty, or having gotten lots of likes. Personally, mine has to be my Rusty Can vs Sunken Sword one

. For yours, though, answer in the comments of the below topic

What is the greatest topic you have ever made? Off Topic

self explanatory title, I have a few W posts, but nothing, NOTHING, beats this: [image] @ThatAsianInTheCorner wood be proud what’s your favorite post and why? 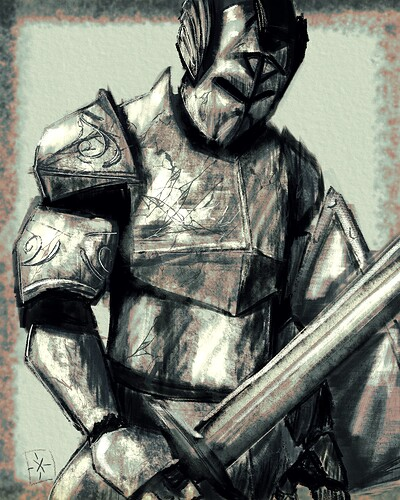 The Exiled - World of Magic
Created by @Spectr

Here’s another artist I don’t remember super well, but doesn’t fail to deliver nonetheless. Seems to be a quite common theme… Either I have a goldfish’s memory, or everyone who enters this community is instantly a god at drawing

. The exiled is depicted here with insane and realistic detail that really puts you in his perspective and character. It expresses quite a lot for just being shades of gray

The Exiled - World of Magic Art

. Lady Carina attends a therapist due to the increased amount of basement-dwelling community members simping over her in-game, and the visit’s topic, mixed with her personality, doesn’t exactly go as planned

. Nonetheless it gave me a good laugh and it’s pretty funny

Therapists Entry: 1: The client’s name is Lady Carina. She decided to not tell me her real name, so I shall refer to her as Carina. This is the start of the session. “Look, Doc. I need serious help. Every time I fight one of those players, they act like their enjoying it! One of them even attempted to lick my feet! I think I’m going crazy. Please help.” The client is expressing emotions of extreme distress. Noted. “Carina, are you sure you aren’t imagining things?” “YES, I’m sure! Listen, …

Last anchor’s riddle was solved by @JTN! Congratulations for being the first to crack it! The answer was… ”Cernunno”!

First to comment the answer below will get a shoutout next anchor!

Server regarding The Odyssey Feed, a news thread for Arcane Odyssey on the AO Forums. | 110 members

vetex has actually already added quite a few of them; cube, sword, greatsword, hammer, fist, spikeball, hand, and phoenix.

vetex has added all the shapes to blast spells he wants until the game releases. The new ones are Bird, Spear, Arrow, Sphere, Dragonhead, Trident, Shield, Vertical Slash, Horizontal Slash, X Slash, Drill, Shark, and Sharkhead.

These sound incredible! I can’t wait to try them out.

The Exiled - World of Magic

I don’t think I’ve ever even seen The Exiled fanart before, other than his appearances in Totally Accurate Arcane. Pretty much all of the WoM fanart around here is of King David Silver (not that that’s a bad thing, just my personal observation).

This is what happens when people simp over lego women.

What the dog doin?

Mine is sleeping on her dog bead.

vetex stated that he wants it to be level 125 now, on patreon chat and hinting at it on twitter