What is the greatest topic you have ever made?

self explanatory title, I have a few W posts, but nothing, NOTHING, beats this: 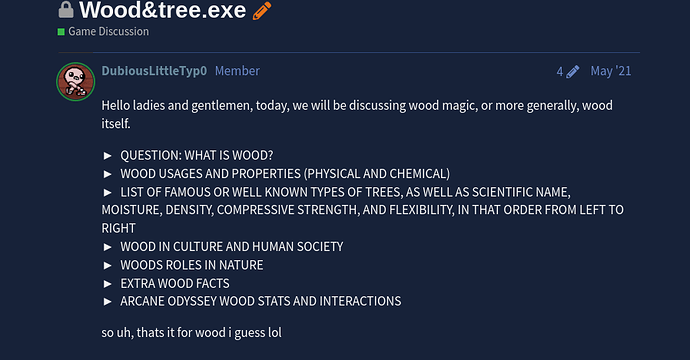 this is the greatest topic of all time

How to avoid trollers Miscellaneous Guides

I AM TIRED of seeing people taking the same bait from a troll OVER AND OVER again like it's taking the entire bucket of candy when it says "TAKE ONE" [image] Just ignore them, dumbass IT’S SO EASY JUST TO CLICK OFF THE TOPIC YET I SEE SO MANY PEOPLE FALL FOR THE BAIT IT’S INFURIATING. It’s better to ignore them than watch it spiral out of control because YOU TOOK THE BAIT. “But I’m bored” SHUT THE FUCK UP!!! [image] It will CLEARLY escalate if you decide to take the bait it’s just bett…

This or my shop idk

The topic
I made where I where I showed you my cookies that I made!

Vetex is just using AO to bypass copyright! Off Topic

Okay so we all know copyright exists, right? It’s that thing to keep others from profiting off the stuff you’ve made without your permission. One of the earliest and most prominent examples of this on Roblox is Pokemon. For years it’s been kept under close examination, a pokemon game never exists on Roblox for a week before being removed. Seems Nintendo is very protective of this IP. What if I told you that AO was secretly a Pokemon game? Would you believe me?

Probably my favorite topic I’ve created and thought about doing a sequel to it.

There’s apparently an entire wiki dedicated to documenting superpowers in fiction, and most of such powers are actually pretty cool, though there is some other…er…questionable ones. This is basically just a post for whatever powers you find on the wiki or even just make up yourself, basically.

I don't know Who and why made this, but there it is: female vetex maid Off Topic

I have a plan for something, but it’s gonna take ages so IG the photoshopping thread??

A story about the other point of view Josh was bored and sweaty. The sun beat down relentlessly and the rock pillar helped slightly by granting shade. They were due for another shipment tomorrow. Then the five of them would sell the ice to nearby people. It was a simple job, though illegal for some reason. No one noticed when ice was taken from remote parts of Frostmill, why should they now? Cactuses were dotted around and sand seemed ingrained into everything from drink to food and in places i…

certainly nothing from my Leandre Drake era

idk one of the like, 6 topics i’ve made
i barely make topics

Summary Welcome to Randomness’s Arcane Recap, this is a recap for all the major updates in the world of AO this year. This is probably the biggest thing I will ever do during my time on the forums, so here we go. Before starting this I know there are 4 guarantees This is going to take ages I am (Probably) not the only person doing one of these I will go insane at least one point I am greatly going to wish that people used remind…

Get a free stand here Off Topic

We've crossed the halfway point of the year by now, and AO’s release continues to (slowly but surely) draw closer. Vetex has made a lot of progress with TGR so far this year; many new gameplay features, interesting islands and story-related content, and some systems receiving large revamps and improvements. With so much being accomplished, it can be quite the task to keep track of all the things that have been done this year. For that reason, I’m creating this topic to serve as a compilation o…

TLDR: I give my opinion on every adjustment vetex added to the list, and want to hear your thoughts on some of them as well So as many of you probably know by now, the Adjustments card on the AO Trello got revamped earlier last month. Many new tasks were added, and objectives on the list were organized into either high-priority (things Vetex will most likely focus on in the near future) and low priority (things that will be worked on farther down the line). *Note that priority doesn’t necessar…

Sand is the most balanced magic in the game Game Discussion

sand is extremely balanced, decent stats and decent synergies, it also has a blinding effect which is pretty annoying to fight against, its hella underrated. if you still play wom then try sand if you make a magic stats tier list and sand is anywhere below A tier me and the sand gang will find you

A rant on all the TGR rants. [Rantception] Game Discussion

So. idk what people are smoking but there has at least been 1 rant on TGR everyday (and sadly i’m contributing to that even though this is a counter rant). I’ve noticed a common theme, the ranter: Has not played AA or has only played it for 5 seconds and then left Has only resonated with WoM and none of vetex’s other games like AS (as was meh imo so don’t shoot me) Did not read the full TGR post, even though they said they “did” they only skimmed through it and that becomes evident the long…

The deepwoken one is a close second

We don’t talk about my first 3 top topics