⚓ The Odyssey Feed ~ An Infamous Revamp! 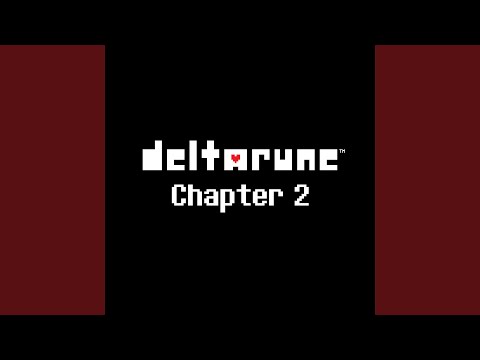 Welcome back to another anchor of The Odyssey Feed! We have an absolute boatload to talk about, so this might be a long one. 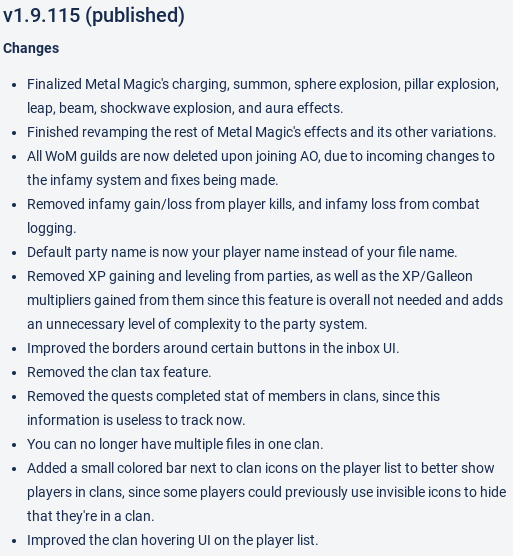 First of all, Metal Magic has been completely revamped (very quickly

)! Maybe one of the fastest ones yet

Next up, a few major guild changes to prepare for the new system that’s been talked about for ages. Confirmed by Vetex many times, all guild data will be removed, and this promise has finally seen the light of day :sun:.

Infamy gain and loss from killing guild members, being killed by guild members, and combat logging has also been removed! We know that territory capturing will replace this, and we’ve talked about it briefly a few times here

Now, we have some changes to parties. The default name of a party when you create it will be based off of your username instead of file name, which makes sense considering so many other changes similar to this. Parties no longer level up, either; While it was somewhat cool, it was basically entirely irrelevant

Next up, we have some visual changes: The Inbox UI and the “hovering over a clan in the player list” UI have been greatly improved. Even greater than this though, is the death of Invisible Clans

! If you’ve been in a clan, you’ve seen at least a few people with clans with no icon at all, which puts them in a great advantage as other guilds can many a time not see them coming and get easily caught off guard. However, in the player list, there’s now a colored bar showing their allegiance to their clan

Last up, you now cannot join the same clan with several different files at once. Definitely an interesting change, probably to make it more difficult to cheat member counts or grind infamy easily.

Speaking of infamy, the next few patch note pages are all about the new infamy system. So i’m just going to sum it up for you

! We’ll cover all the other things on those patch notes after… kind of like last anchor. 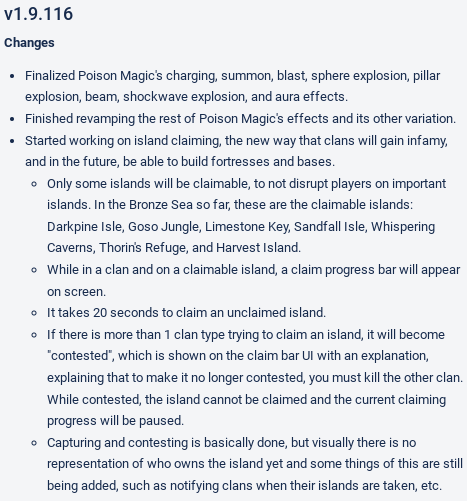 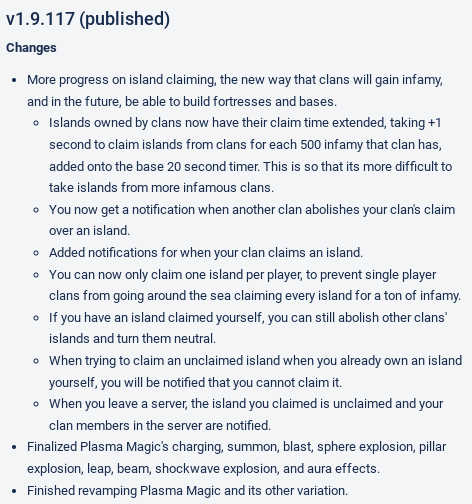 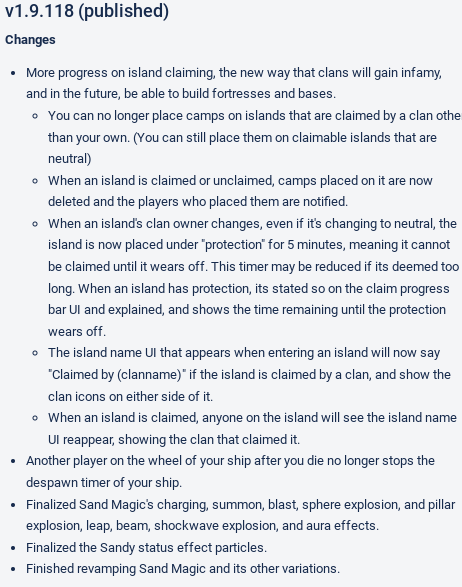 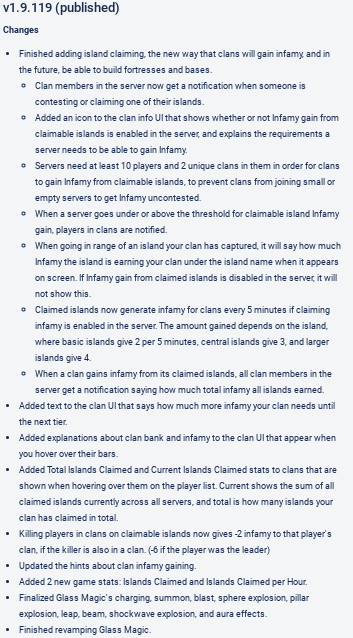 Infamy gain from capturable islands will only be enabled (As explained and shown by an icon in the Clan UI) if:

When this threshold is reached or if it is gone under, a notification will be sent to all clan members saying such, which is definitely pretty great

Now, how is the actual infamy gain? Every 5 minutes, all clans will get 2 infamy for each basic island they have captured, 3 for each central island, and 4 for each larger island

. This means that larger and more prominent wilderness islands grant more power and infamy to your clan. When this infamy gain happens, clans will receive a notification saying how much infamy in total they got

) for quite some time, but Clan Minigames and Clan Flagship are new and interesting

. Clan Flagship and Kingdom Islands remind me of the Guild Hall idea in World of Magic, where the clan comes together to create a home base. These sound super cold

And the Clan Minigames sound equally intriguing, especially that there’s infamy on the line. Some ideas presented are ship battles and capture the flag, both which sound super cool and would add a great deal of fun to the game

It’s definitely a much better system. Something interesting though is that the only way to lose infamy is being killed by a different clan on a capturable island. This will remove 2 infamy from your guild, and 6 if you’re the leader. This is only going to happen if you’re trying to steal an island from a clan or vice versa.

I remember owning a guild in World of Magic (Which is its own discord server now), but unfortunately disbanded it since I was simply too stressed out by the horrible system of having to simply pvp and gank for infamy :frsleeper:. This fixes everything, since it seems there’s not as much pressure being forced on us now

Meanwhile throughout those patch notes, poison, plasma, sand, and glass were revamped, in just a few lines of text, which is definitely a pretty big W

. And after you die, another player on the wheel of your ship does not stop the despawn timer, making it so people can’t steal your ship as easily

Next up, let’s look at some of the new stats and such in the Clan UI: First, there’s now scroll-over text regarding the clan bank along with infamy

(among other uses as well)! This comes along with some new hints regarding the brand new infamy system

That’s all for this anchor! I love the new system and I hope you guys do as well 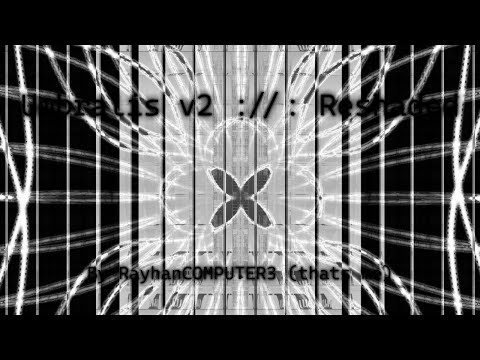 After a month of hard work, Rayhan submitted his incredible work to the second TRIA.os mapmaking competition: Umbralis v2: Reshaded

! It’s a remake of the map he submitted to the first mapmaking competition, and it shows just how many hours went into this! Take a look at the video for yourself. It’s a monochrome world of delicate shapes and lines with music to match. Great job Ray

Hey so, the second TRIA.os map competition came around. So I remade the map I submitted for the first one . I used a different style while keeping a similar atmosphere. So after 1 month. Umbralis, Reshaded. [Umbralis V2: Reshaded] 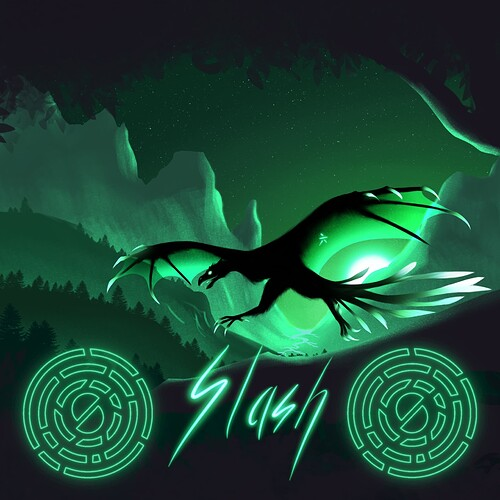 It’s been a hot minute since we’ve seen an art topic from liu, so let’s take a look! As part of the Lost Magic Elementals Collab, this one being Slash Magic Elemental

! Take a look at the speedpaint yourself to see how, over time, this one was crafted. I love how the whole thing is presented in tones of green, matching up with the theme

) of Virgil, we go back to some enchanting story and dialogue. In some casual conversation, Virgil asks to enchant some of Carson’s amulets

. And it’s up to you which ones he enchants in this newest chapter of the most interactive series

[image][image] [image] [image] As Virgil wondered what to do with charms, he remembered Carson. Even if Carson had Ace around, Virgil couldn’t help but think he needed to spend more time with him. “Oh, yeah. Carson has some amulets. I think I’ll try charming those.” “I see. Has he mentioned any interesting charms?” John asked. “Hmm… Nope. But I’ll ask later.” “Alright. I’m gonna sleep. You can just go ask him tonight.” As John lay down on his bed, Virgil looked at the clock in his room. …

Last anchor’s riddle solver was @Gagiu! Congratulations for being the first to crack it!

Server regarding The Odyssey Feed, a news thread for Arcane Odyssey on the AO Forums. | 45 members

Can’t wait for all the leaderboard clan names to get stolen! Will be pretty funny.

Thanks for the shoutout to Umbralis. It has more connections to AO than you think, Umbralis was originally an island in Robobitch Odyssey and the name was suggested by Robotstics. You get your best ideas from the weirdest things…

You get your best ideas from the weirdest things…

I can definitely confirm that.

I’ve done these types of riddles before in the past, i’m sure you’ll get it

All jokes aside, great anchor as always

Can’t wait for all the leaderboard clan names to get stolen! Will be pretty funny.

Let’s all be ready to steal Suncry when AO comes out.

Can we get a list of the current names so we can choose before Ao. 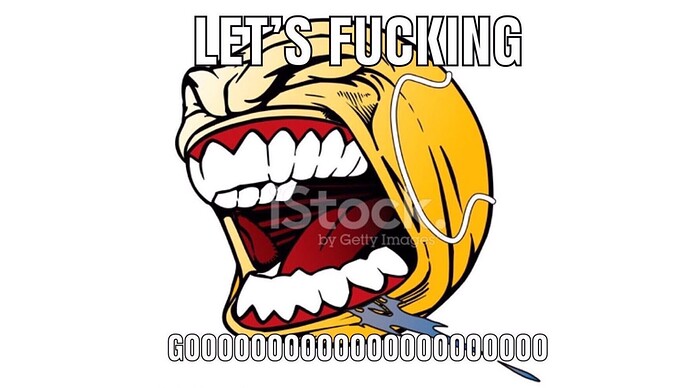 I don’t give a crap about clans anymore, but this is exciting nonetheless

OH HECK NAW i’ll fix that. Thanks for notifying me