⚓ The Odyssey Feed ~ The Devourer of Leaks! 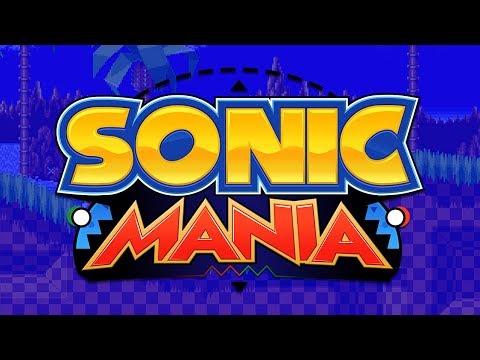 Here there, this is Cryonical

! Welcome back to another anchor of The Odyssey Feed! Like the last few days, i’ll cut the small talk and instead get right to a fresh batch of Arcane Odyssey leaks

First of all, take a look at THIS 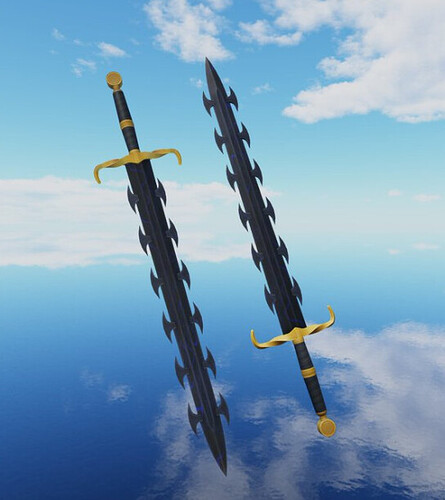 This wasn’t actually made by Vetex… but he did commission it! This super cool looking sword was made by the twitter user Coldshockz (based name 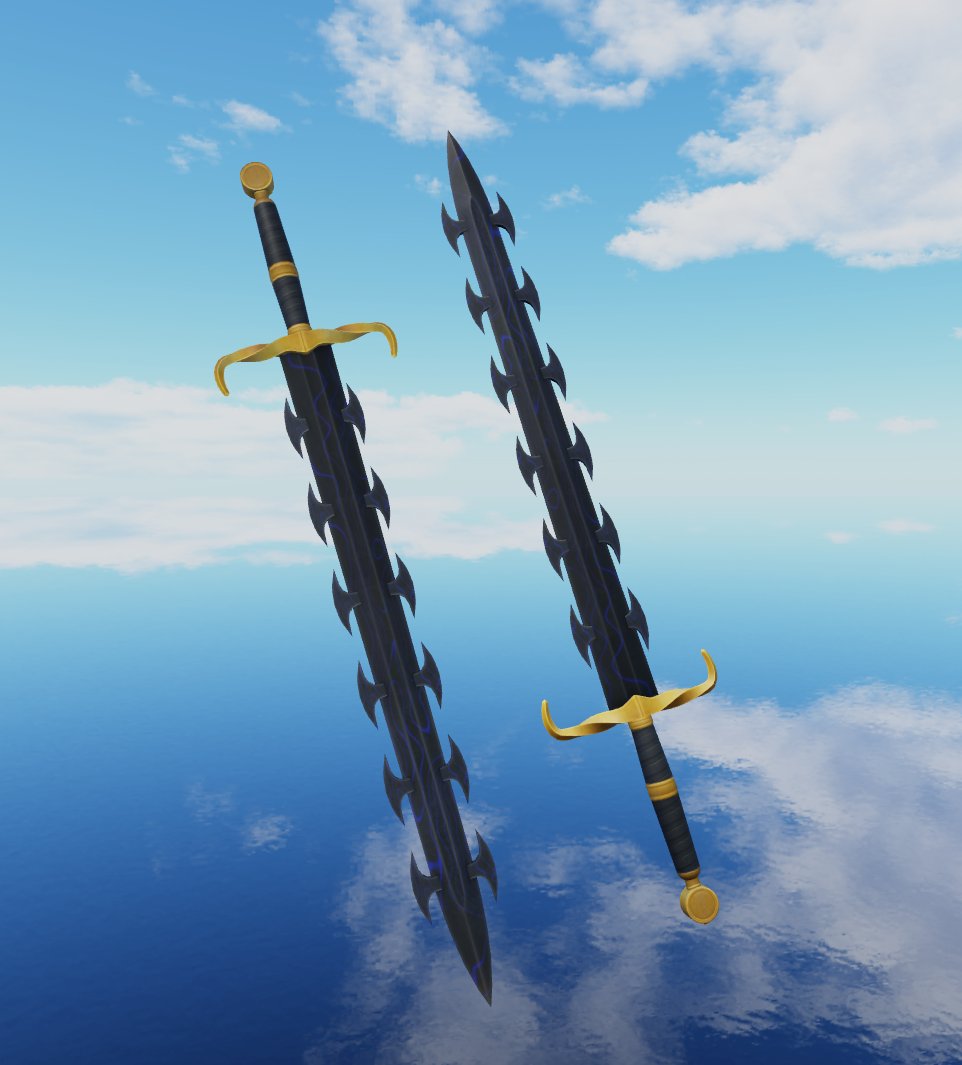 @
Commission for @_vetex Thanks for the opportunity! #RobloxDev #Roblox

As you can see, it looks really cool, with blue marks curving around it’s blade, a beautiful hilt and deadly looking spikes coming out of it

. Yet another reason why this is exciting is that not only will this almost certainly be accessible to players, but this is the first time in a long time Vetex has commissioned something for his games… correct me if i’m wrong

. He usually tweaks existing Roblox items, so this will open up a ton

This is a screenshot taken of the Credits page on the trello, showing that the weapon previously shown is called the “Cursebane”, and is wielded by General Argos. It also looks a lot like a boss sword, and it seems clear that this was made for an enemy. Putting these clues together

, it makes sense that General Argos will be the Ravenna Boss that is currently being worked on… so this will be his sword

! It’s speculation and I haven’t seen it in-game yet, but i’m quite certain.

It’s also called a “Devourer”, as the name of the type of weapon, kind of like “Mace” or “Bow”, which is pretty interesting. That aside, it almost certainly will just be a Greatsword, but has some implications

Major thanks to @Rayman_Axel for being the first to notify the forums of this whole thing, along with that screenshot

. Going back to the trello for a second…

First of all, we have more progress on the Fort Talos Boss, who’s probably General Argos (as I just mentioned

And since Vetex has finished Acid, he’s moved right on to Water, which was finished extremely quickly

! No doubt because Water and Acid magics share such similar graphics.

Finally for this version, Soaked and Bleeding have had their particles improved, probably making use of some of the newer techniques he’s been using

Next, we’re going to look at some more of Vetex’s own words

! These might be more interesting than you might first suspect. Here’s an analysis of these from the same person i’m thieving borrowing these screenshots from, @ClashMaster273… I’ll be leaving a few out that we already know about, or aren’t really exciting and new.

First, we can see that the compensation for boss items won’t be weapons, nor armor

. To be honest, i’m still vouching for enchant scrolls, they seem like a decent way to compensate! Shouldn’t expect super unique stuff here, since there’s better things Vetex can do with his valuable time

. You can discuss it here below 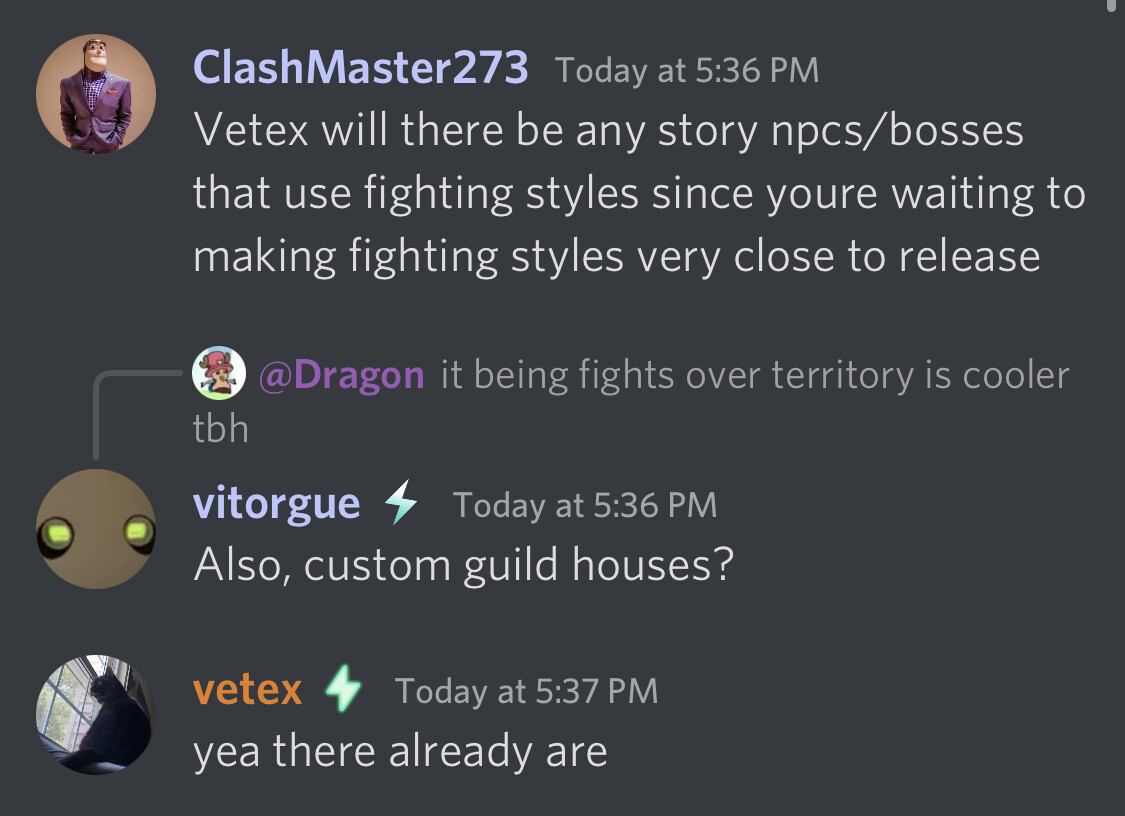 This means that there’s already at least one boss that using fighting styles, even though they haven’t been implemented. It would be pretty strange if the decent quantity of bosses before release had no fighting style representation

. Fortunately, Vetex has us covered once more

! Wonder who it could be?

Vetex has confirmed that infamy will no longer be gained through killing other players, and most likely will be a territory system where clans can control islands, giving them a passive infamy income

. You would have to fight over territory though, which would make sense with what Vetex said. This is all speculation, though

Here, Vetex confirms one of the existing bosses has no relation to the storyline and is more of a “side” thing

. Some of you, based on the existing story parts and knowledge of the existing bosses, have already guessed who this might be

Self-explanatory, but interesting nonetheless. Here’s something a bit more interesting

Not only are there a whopping 26 islands in Arcane Odyssey right now (man, time flies…

), but there’s planned to be around 40 upon release, which is a whole lot of exploration and storyline

! It’s not all good news though; since roblox starts glitching a certain distance out, and the dark sea surrounds the map, the seas must be limited and size and can’t all be as big as the first

It’ll be a lot different than some of the earlier ones, that’s for sure… And last but not least, Vetex has revealed what boats will be included upon Arcane Odyssey’s release

Wasn’t expecting this much, honestly. And if you look at the Boat Ideas page on the trello, you’ll see there’s a lot more to come! These will definitely do for now, though

. Can’t wait to see how the ketch and frigate are different from their AA forms!

Next up, we have some trello changes! First up, Mud and Promethean fire were deleted from the Magic Types card, which sparked a very needless argument (

) which was eventually ended by Vetex. After this, all of the lost and ancient magics were removed from the card. Since these things are all years away, it doesn’t make sense to have things listed right now

Onto something a bit more light, two new things have been added to the card below!

These are Instrument Weapons and Waist Lanterns

! Instrument weapons are an item type that can buff your teammates! It’s known that they require some weapon stat and that they will be in-between 100-250 in terms of their level requirements

. This is something i’ve wanted for a long time! Though it would be cool to be able to play them similar to AA instruments, I wouldn’t say that’s likely

You could discuss it here, though:

[Screen Shot 2022-06-20 at 1.43.52 PM] This is very interesting.I don’t recall seeing this before. …now I wonder how I’m going to optimize my support build. I can’t truly decide until I see the requirements but I do love planning out my builds. I guess now I have to choose between Paladin(Tanky healer with enough stat points to utilize some of the buffing weapons) Mage(If theres going to be lost spells in the future which can also buff people) or Warlock(Which would be squishy but allow me to u…

Next up on our itinerary, we have a few neat images. Here we go

A new header for the Vetex discord server! As you can see, two ships sail among a setting sun, with the new water texture

! Quite the vibe… I swear i’ve seen this one before. Is it just me? Am I going insane

This is an image of a sunset on Cirrus Island I took a few months ago! Apparently, it became the server invite image for the Vetex Discord Server

. After noticing this on Reminders for AO (Electric Boogalooo

), I asked Vetex if I could share the whole image, and voila

That’s all for this anchor

What stat build(s) will you choose and why?

With so many special builds in Arcane Odyssey, from Weapon Auras, Arcanium Weapons, Soul Apparitions, Weapon Fighting Styles, and so, so, so much more, there’s a whole lot to think about for your build in Arcane Odyssey

. It’ll be pretty difficult to get your full on all the content of this game. What are you going with? For me, i’ll have all 6 of my files with different builds, gimmicks, and plans! I have a trello, if you want to ask

What stat build(s) will you choose and why? (new poll added) Game Discussion

it’s been done before, but people have started talking about them again and i’m bored, so might as well poll second one’s just a pie chart to see the data differently (half of it gets eaten for some reason, but opening it in a new tab seems to show it) (the darker the colour the further down the voting list it was i think) poll let’s do just that then poll 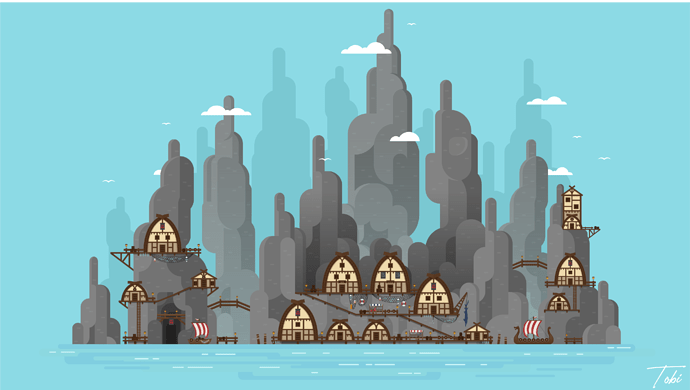 Once again, Tobi returns with yet another entry to his Flat Design series, this time depicting Redwake in a 2D setting perfect for wallpapers

! From colorful banners to beautiful boats (and some pretty wacky and wonderful shaped spires), it’s sure to take you on quite the Odyssey

After a rather disastrous start (Spoiler Alert: He didn’t fall down the stairs

), Virgil is ready to practice some charms, something he’s quite invested in! Problem is, what’ll he use to actually charm? Time to return to passion

! Turning back to something more tangible, Lost Things is sure to excite with its invigorating interactivity and language

[image][image] [image] Virgil’s story starts from now. [image] Virgil’s head didn’t hit the ground, did it? Everything sure appeared dizzy after falling like that… But as long as no bones were broken, it’s fine. Before he could tell Carson to not run downstairs, Carson had already arrived next to him. “Virgil?! You good?” “Yeah…” Virgil pushed himself up, as his balance was still unoriented from the crash. Guess he’s still not used to having just one eye, considering how it made him clu…

Last anchor’s riddle solver was @GlitchingEclipse! Congratulations for being the first to crack it!

The answer was… ”Cirrus Island”!

In its grasp, a forlorn deal. Within the walls, a heart of steel.

Server regarding The Odyssey Feed, a news thread for Arcane Odyssey on the AO Forums. | 27 members

A chronological period in which the doppelganger exhibits untrustworthy demeanor.

didn’t expect to get featured in one of these, especially so soon after beginning to post stuff, thanks

Here you go. Reapers and the character backstories might be outdated, along with the appearances. Mainly since i’m starting to move my characters out of the Arcane Universe and into my own universes!

In its grasp, a forlorn deal. Within the walls, a heart of steel.

Fort Talos? I can’t think of anything that fits forlorn deal so I am not sure

Thanks, I liked your topic! Always trying to be more inclusive (Sometimes there’s like one art topic in a week though haha)

Pog, if only I didn’t already use all my likes for the day

Though there isn’t too much context to this, vetex has confirmed that infamy will no longer be gained through killing other players, and most likely will be a territory system where clans can control islands, giving them a passive infamy income

. You would have to fight over territory though, which would make sense with what Vetex said. This is all speculation, though

Sure, but if it’s a hassle then don’t bother

WOW! Didn’t expect to be featured on the Odyssey feed again, and so soon!

We finally have a better look at Cirrus!
Could have used this image when I was creating my art piece but I’m not complaining. 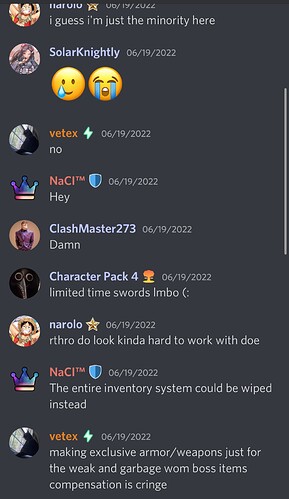 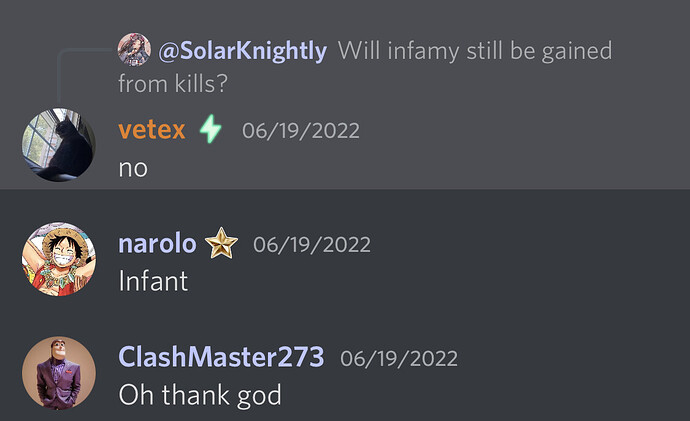 Got it, thank you so much

since there’s more at stake, people will try harder to keep their territory and aggressively expand it

What camreeyan said. I honestly can’t see it being as toxic as simply getting infamy through killing other guild members.